Posted on August 6, 2014 by TouringTunes

With a big breakfast to start us off, we continued on from Hot Sulphur Springs toward Walden, CO, crossing the Continental Divide, miles of dry sage brush and stretches of glorious mountain views. We were glad we had enough water packed, because there were ~40 mile stretches without any services or water stations, and it was hot and uphill. 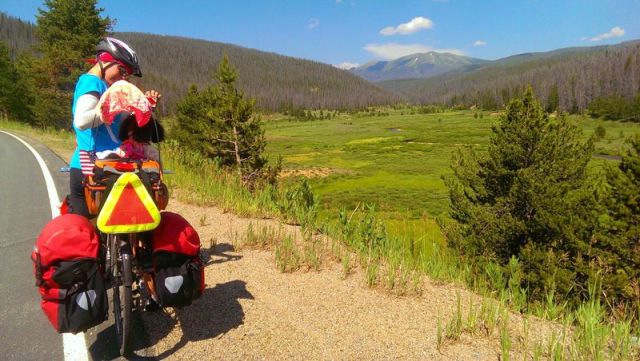 When we approached the isolated town of Walden, we’d come a long way before seeing any other people. Oddly enough, we were followed by a few women cyclists we chatted with back in Missouri who were surprised to see that we were ahead of them, as they’d been pulling “century days” (riding at least 100 miles per day) and were a lot less heavily packed than we were. We just smiled and told them we found a shortcut through Kansas. They were also curious about the pole that I had strapped to the front of my bicycle, so I told them I used it to prod Greg along when he’s going too slowly. (It’s really an extender arm I use for the GoPro camera to get some nifty shots of Petunia as she rides).

In Walden, we had the great fortune of staying with our first CouchSurfing host, Lindsay and her two teenagers, who had just returned the previous day from a massive hiking adventure in Nepal! She made us a wonderful dinner and showed us some great pictures from her trip and shared fabulous stories of hiking to base camp on Everest. She had a great view of the mountains and told us what it was like living so far out in the wilderness of Colorado (the town cancelled their recycling program, so if one wants to recycle, a 90 minute drive to a paid recycling facility was the only option) and what hiking in grizzly country was like (“I carry a gun in my yoga pants”).

The next morning, we stopped at the local dollar store to replenish our constant supply of instant oatmeal, PB&J, and dog food, and were chatted up by some locals. It seems like so many older people keep approaching us, wistfully inspecting our bikes and sighing, “I wish I had done something like this when I was your age,” or “it’s so great that you get to do this while you’re young!” We feel so lucky to have been helped along the way by so many people and cheered on by friends, family, and strangers. As we prepared to ride out of northern Colorado, the blue skies reflected our sunny moods and we were Wyoming-bound.