Do you wanna come on down to the city of Missoula? On a summer day, the Clark Fork River’s gonna cool ya

Note: This post was originally written on August 9th, 2014. The blog went on a bit of a hiatus!

The Idaho border was nearly in our sights, but first, a trip to one of the bigger cities on the route: Missoula, Montana, headquarters of the Adventure Cycling Association (the non-profit that produced our maps and originally mapped this ’76 route). 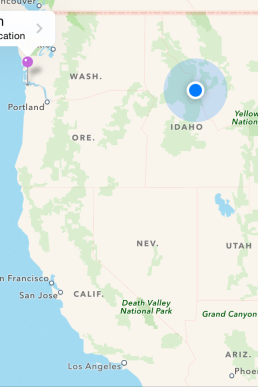 Petunia and I donned matching smiles as we enjoyed the temperate weather and pleasant ride through a funky old-western looking town and crept toward modernity. Before reaching Missoula, the views of the mountains, farms and wildflowers in Lolo were showcased alongside a scenic and safe bike path. The paved path, separated from the main road, was covered in hopping and flitting locusts, creating a low-hovering cloud of yellow-gray bugs that constantly sprang up ahead of my front tire. 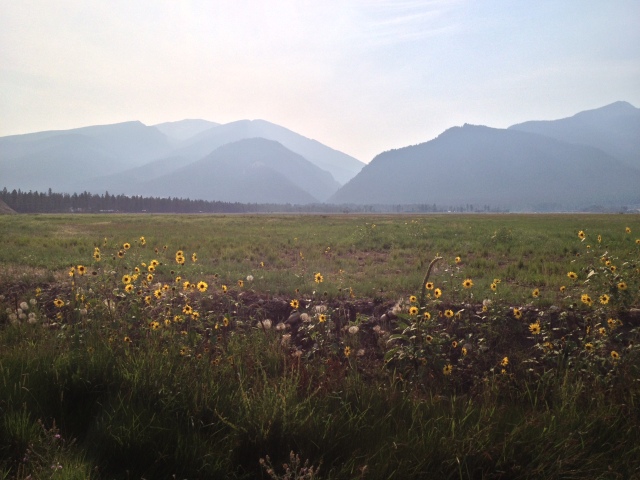 There were some scary sections of highway without a shoulder that we had to ride in order to reach the city, but once we were there, that strange feeling of being suddenly overwhelmed by civilization and development was more dizzying than the traffic.

Reaching Missoula at sunset, we made our way to the other side of the city, where we met our lovely WarmShowers hosts for the night (which turned into the next few nights as well), the warm and welcoming residents of a hip shared home of Courtney, Corey, Jane, Sean, Jacob, Gwen, and Maalaea the Newfoundland, the biggest dog Petunia and I have ever seen.

We tooled around Missoula for a few days, checking out the ACA office and enjoyed a little photoshoot courtesy of Greg Siple, Art Director at ACA. We also got to weigh our bikes… my mostly-stocked rig weighed in at a hair over 100 lbs, including Petunia, and Greg’s rig weighed 90-something. And these were the weights after mailing home some gear and shedding supplies!

Our lovely hosts took us tubing down the Clark Fork river, and filled us in on what life is like in the young, hip, liberal pocket of Missoula, with its large concentration of non-profit social service organizations, bike-friendly attitude, and seasonal influxes of young, homeless wanderers and nomads. In return for their many, many kindnesses, we grilled up a ton of fruity kebabs in a glorious feast, a festive outdoor round-table style share, interspersed with moments of somber reflection on the cultural loss of Robin Williams’s passing.

Our hosts generously let us stay for a few days, and I picked up a nice care package that my boss mailed me all the way from Jersey– tasty treats for me and Petunia, and some gift cards for me and my human companion. Missoula was a great stop and I’m glad we got a chance to stick around and explore it. It seems like a city I would enjoy living in! We might be back someday. Plus, fun Missoula/cycling/music trivia, from Wikipedia:

“Apology Song,” originally sung by The Decemberists’ frontman Colin Meloy into the answering machine of a friend named Steven as a legitimate apology for the loss of a beloved bicycle named Madeline, contains several references to Missoula, Montana. The “Orange Street Food Farm” is a local grocery store popular with University of Montana students (mostly for buying beer). The “Frenchtown Pond” is a reference to Frenchtown Pond State Park located in Frenchtown which is approximately 15 miles northwest of Missoula. Meloy told audiences on 2 October 2007 at Royal Festival Hall how they reclaimed the bicycle years later, only for it to be crushed between cars when he was helping the true owner of the bike move house.

Petunia is an 8-year old Jackapoo (Jack Russell-poodle mix) who has traveled across the United States on the back of her human's bicycle.... twice. She's also cross-country cycled from Busan to Seoul, South Korea. Petunia and her human currently reside in Montana.
View all posts by TouringTunes →
This entry was posted in Montana and tagged ACA, Adventure Cycling Association, bicycle touring, bicycle touring with dog, Clark Fork River, dog on a bike, Missoula, Montana. Bookmark the permalink.