After months of preparing and longing to get back out on the bike with Tunes, we left from our home in Lambertville this morning at about 9 AM. Our first stop was just a few miles away to say a heartfelt goodbye to my awesome boss and dear friend Anita, who has been beyond kind and helped make this journey possible. Then, just like that, we were touring again!

It was fitting that the first <20 miles were on the towpath along the Delaware River, riding through the dust and bugs, a path I’ve traversed many times since moving to New Jersey (and one of the selling points to get me to move down here, truth be told). Tunes has history there, too, as that’s where we first used to go riding when she was smaller and rode in a dog-carrying backpack before the Tunes Machine was a reality. There were a lot of people out walking or cycling on this warm Sunday morning, and as we passed people strolling along, it was fun to hear the reactions once they realized Petunia was on board. “Oh my god! See the dog on that bike?” Others laughed, some gasped gleefully, and one person announced that this little dog on this massively packed bike was the cutest sight she’d ever seen.
Soon enough, I’d passed Frenchtown and started going farther north than I’d been before. River road wasn’t a full two lanes wide, mostly without cars, and bordered by the Delaware on one side and a red rock wall on the other. It wasn’t terribly hilly which was pleasant, and I was making good time without breaking a sweat, although my legs definitely were working. This year, riding totally solo and with some new and borrowed gear additions, I notice how heavy the rig is– much more than the last time around. The night before I departed, I loaded up the Trek and took it for a test run down the block, and nearly fell over from the uneven, unwieldy weight on my front end. The bike was nearly uncontrollable, and so I pedaled the short distance back home and set to work on lightening my load.
The austerity measures were somewhat grim– I ditched the new travel fishing rod and accessories that I packed when I had hope that I might catch and eat some fresh fish on this year’s ride. Then I abandoned the cook stove and fuel, the pan and the titanium spork. Next went some bike supplies and tools that hopefully won’t be used: spare spokes, brake pads, duplicate Allen keys. The silver emergency blanket, a pair of pants, some parts of the extensive first aid kit, and 2 pounds of dehydrated dog food were next to go. The more I expunged from my panniers, the more foolish I felt for having gone so wrong. And to think that I’d gotten the hang of this last year! Hrumph. All in all, several pounds of items were left behind, and the bike handled much better. But it was still too heavy for me to pick up, and although I’m not ripped, I’m no wilting daisy either. I figured I’d get used to it over time, or just push it up the really steep hills. And probably decide to send some things home later on.
In Pittsburgh, NJ, a rather run-down looking city, I made my first stop at a little bodega to refill water and buy Tunes a tiny cup of vanilla ice cream. I hesitated about leaving my bike outside after I saw two printed signs taped to the door that read “You can come in if you are a customer which means you have money to BUY something, otherwise please wait outside,” and perhaps more telling, “We do NOT sell bath salts or spice/K2.” But I leaned the bike up against the window and went in anyway. Once outside, a couple of 7 year olds approached me on small bikes of their own and wisely asked to pet Petunia. I obliged and they asked me about my gear and where I was going. One kid was mesmerized by my front lamp. It was fun chatting with them for a minute and seeing them try to work out how I could ride across the country with a dog just by pedaling.
The roads became modestly hilly, and one particularly steep section had me hopping off the bike to push, although I realized that it was so heavy, even pushing it was a trial. But overall, it was a beautiful day and a peaceful ride, and many others were out enjoying the holida weekend as well, and I counted about 20 kayaks and quite a few boats on the river. 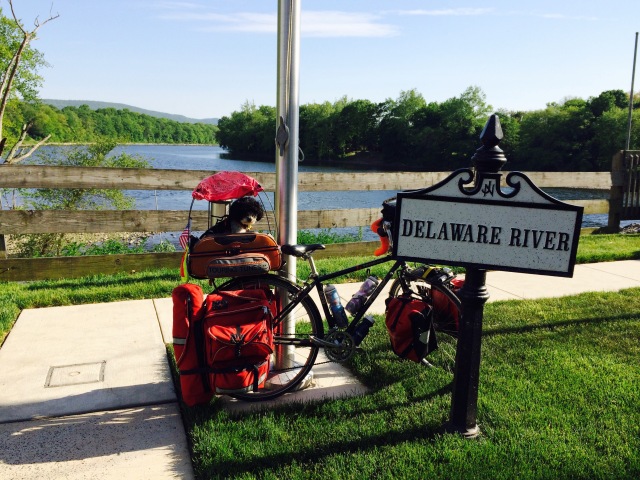 I stopped at a lovely restaurant that had outdoor seating called Nonpareils and treated myself to a First Day Out dinner in Belvidere when I hit 60 miles. I feasted on an excellent tomato zucchini basil soup and a giant spinach salad while Tunes has treats and bleu cheese. Then we crossed the river into PA, and stopped at a campground in Portland. A simple water hook up camp site was $45, so I cruised around and asked a couple of friendly looking people if I could toss them a few bucks to set up my humble tent behind their mammoth RV, but they seemed nervous about the “very strict” rules of the campground and didn’t want to get in trouble. They were all to happy to share a big serving of grilled chicken, broccoli and yellow rice, so we gratefully accepted, washed up in the bathroom, and beat it before it started to get dark. A few miles away, I found a little clearing off the side of the road, and set up camp not far from a railroad track and a big stack of wooden railroad ties. I shared the chicken and rice with Tunes, then took a makeshift shower with the help of a few water bottles, and retired for the evening. It wasn’t a glamorous location for my first night out, but it was quiet and it was free, and after my first 71 mile day, all I needed was a place to pass out, anyway.