Before I left on this journey, I went to visit my Grandma Judy and tell her goodbye for now. We went down to the common room at her assisted living community to see an acoustic guitar player-finger picking standards from the 20s-60s, and before and between his songs we chatted a bit. “Be good, and don’t talk to strangers,” she advised me in her effortlessly good-natured way. But for me, talking to strangers has often led to some of the most memorable and life-affirming moments on a trek like this one.

Following a peaceful night’s sleep, I bid my cousin adieu after he shared coffee and route chat with me. Thanks, Marc! It’s a great shot of you and Tunes, but I almost don’t want to post any more pictures of me, as I’m looking unkept and plain, makeup free and utterly unremarkable save a slight resemblance to a potato. But moving on.

I had a little breakfast with the Tunes and got back on the ACA course towards Dutchess County, NY, an area as regal-looking as its name implied, including rolling, steep hills that were a bit of a royal pain. One gorgeous farm after another came into view, with cows milling about freely near a pond dotted with lilly pads, horses at the edge of a large lake on the side of a hill that boasted a brilliant red Mansion-sized barn, and a plethora of vineyards lined with fledgling greenery. Though it was buggy and muggy out, it was not dishearteningly so, and I pedaled uphill as fast as I could muster, attempting to shake off the incessantly annoying gnats that were unintentionally becoming my late-morning snack.

A few days ago, the climb up what felt like the steepest hill in PA was utterly unrewarded by a descent down a wrecked rubble of a road, pitted with potholes that threatened to wreck me if I didn’t ride the brakes all the way down and steer ultra-defensively. But the worst climb of the day in NY concluded with a fantastic view of the rolling hills of the county and a sweet downhill cruise that cooled me, and immediately wiped clean all of the self-doubts that mounted with each strained stroke from pulling literally my own weight’s worth of bike/gear/dog.

Before I reached the summit, I stopped and asked a landscaper for permission to fill my bottles from the garden hose, and he was happy to help out. Between the both of us, I figure Tunes and I go through 2-3 gallons of water a day, and that’s before we stop at night and “camel,” filling up on water the night before to help ensure the following day’s hydration. Sometimes it’s easier to carry 3-4 full 24-ounce bottles and stop and refill or ask for water than to carry 6 full bottles, but sometimes on these hot and hilly country road routes, you just drink it all before you see any people or places to help out. Plus you get to talk to more people, anyway, and the landscaper, whose name he never gave, donated a couple of dollars towards my fundraiser for Gearing Up. (Hint: You can do this too. Donate to Gearing Up to help women get back on their feet and onto bicycles.) Good deal!

We stopped for more water and a satisfying lunch, including a GIANT PICKLE, YEEEEEAH, at the deli in Amenia, where a cute outdoor table in the shade was a nice place of respite for the both of us.

Then came one of my favorite things about cycling: rail trails. Eff yeah, rail trails. Scenic, quiet, usually flat, lots of plants and animals to see, and only for pedestrians, so no pesky cars to worry about. I think this phrase is becoming one of Petunia’s favorites, because it’s so safe, she gets to enjoy one of her absolute favorite things in the world: running. This dog is totally a runner, and I prefer to pedal, so we become the dream team out there, both enjoying the exercise and fresh air. 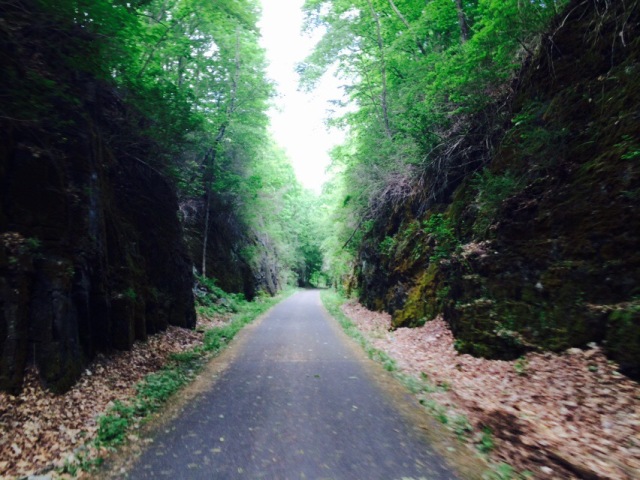 I realized I must’ve looked extra gross when I made a quick stop in to get more toothpaste at a chain-pharmacy store and the clerk looked at me nervously like I was going to drop dead of spandex exhaustion, but I pulled out some more strength to plow up one of the last climbs and crossed the border into Connecticut, my home state!

Hooray! And… now what? I didn’t think making it another 21 hilly miles to Norfolk was going to happen before the forecasted evening thunderstorms, so I checked WarmShowers on a whim. Sure enough, there was one listing in Lakeville, just 5ish miles away, from a woman who had quite a bit of solo bike-touring experience on the TransAm! I knew it was a last minute request, which isn’t too nice to spring on someone, but I took a chance and left her a voicemail. But having passed Lakeville shortly thereafter, I kept on pushing a few rolley miles into Salisbury, CT, and had just pulled over to strategize some rogue camping options when the phone rang. It was WarmShowers host Devon! She sounded kind and welcoming, and even though she had a lot to do to get ready for a hard three days of work starting early tomorrow AM, she was very willing to let me have a safe place to stay with her. I turned around gleefully, made a quick stop in a health food store where I picked up some dry roasted pumpkin seeds, ginger soda, cocnut water, and pecans with cranberries, and I backtracked about 3 miles.

I got a great vibe from Devon as soon as she greeted me and helped me move my bike indoors. About my age and with similar interests, we hit it off, and even though she was busy, she kindly treated me to a pesto and sweet potato dish she’d cooked up and made time to chat about our TransAm and other life experiences. As a nurse for Doctors Without Borders, she’d traveled the world, even bravely helping out during the Ebola crisis, and now had ambitions to go back to school to learn midwifery. She was ultra nice to me and Tunes, and even though she claimed she’d never been much of a “dog person,” Tunes didn’t notice and followed her around, sitting beside her while she studied. Just as I settled in, the threatened storm came crashing in, with lightning and heavy rain, and I was glad to be indoors and clean, and hanging out with such a cool, inspiring person, who had been a stranger to me just an hour before. 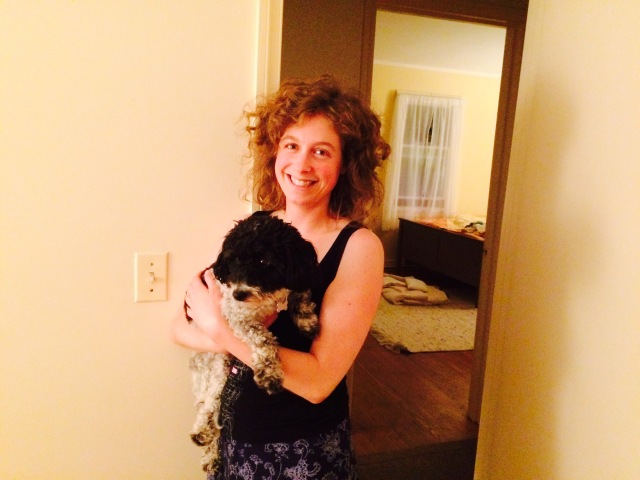 The little cow was happy to be back in bed, of course.

Song of the day: Yonder by Donna the Buffalo. http://youtu.be/63_BVcJZb5k