Song of the day: Many a Mile by Buffy Sainte-Marie http://youtu.be/MSYYNRdteNg

With the torrential rains of the past two days behind me and ideal bike weather ahead, I dragged my bike from the shed, made a few feeble motions that resembled stretching, and hugged and kissed my mom and brother goodbye. After five days of lounging about, reading books, leisurely identifying birds by sight and song with my new app from Cornell’s Lab of Ornithology, and eating everything in sight, I set off with the understanding that even if I pulled only 20 miles today, I would be happy just to have moved exuberantly and with great delight with the sun on my cheeks and my bestest buddy on the open road.

Leaving Bloomfield, I decided to join up with the ACA route by way of my own little nostalgia trail, the Bike Ride that Started It All. One summer day when I was 13 or so, I hopped on my wintergreen hand me down bike that usually got me to and from the town swimming pool most days, and for whatever reason, I decided to go for an unusual ride. I took it out of town into neighboring Windsor, past a boat launch by the Connecticut River, and up and over the protected pedestrian lane of the Bissell bridge. From there, I followed “Bike Route” signs all the way to Manchester, had a drink of water in the fabric store near the mall, and sat with my thoughts for a second. I felt a tingle of freedom and accomplishment, and a strong desire to go farther, to explore the boundaries of this sort of travel. And because I hadn’t told anyone where I was going, I felt somewhat independent, like I had arrived at a mileage post of maturity. Maybe it was only a 15 mile marker, but it felt like something. Oh, and there were 15 miles to ride home, too, so I found one of the last working pay-phones of the era and called home to say I’d be a bit late for supper. 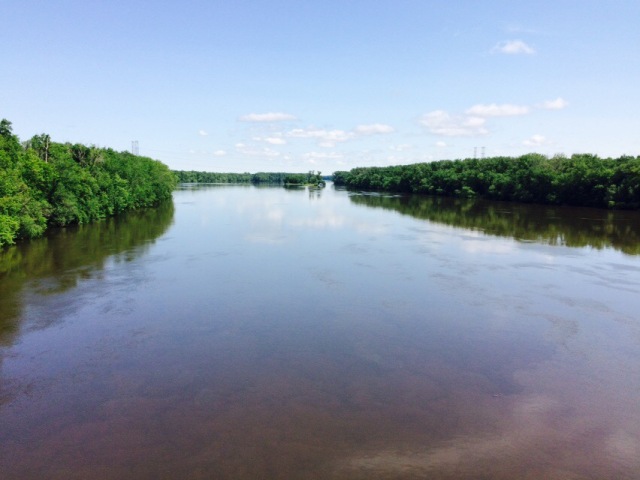 Having crossed memory lane, I considered my GPS to plot my next turn to join back up with the map route. Paul from Windsor rode with me a few miles on his recumbent on bike, sporting a Long Trail jersey and sipping from a water bladder he had mounted on a rear rack of sorts. “There’s road work up ahead which cuts my ride short by 2 miles, which is sort of annoying, because ordinarily this ride, from my house to the end of the bike route, is an even 20 miles. A perfect 20. But anyway, you can turn down this side street to get to where you’re headed.” 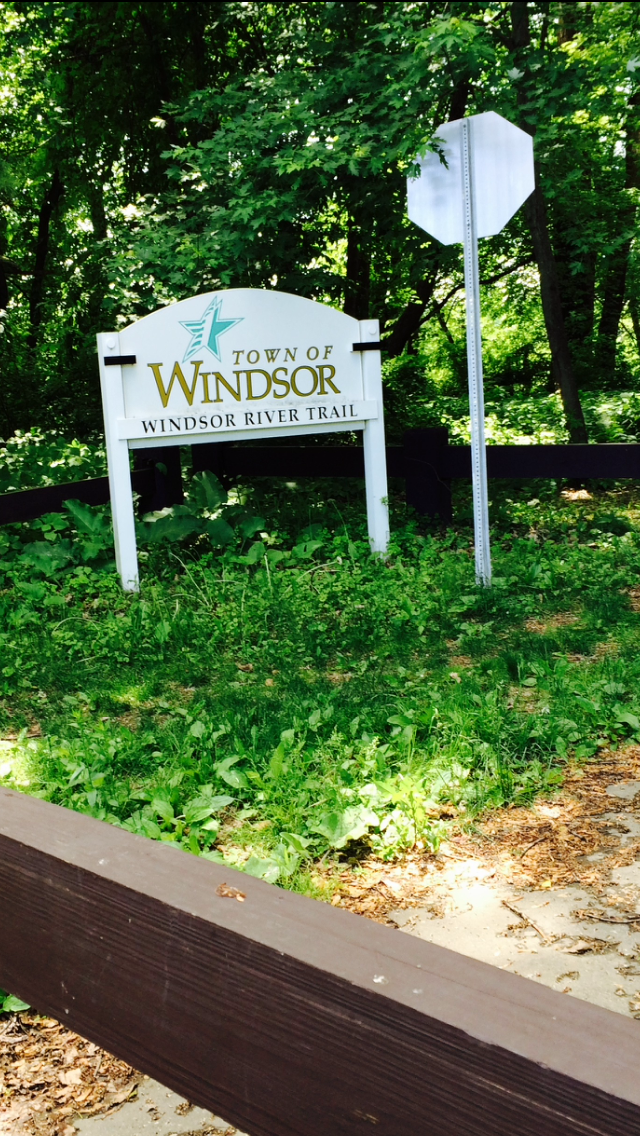 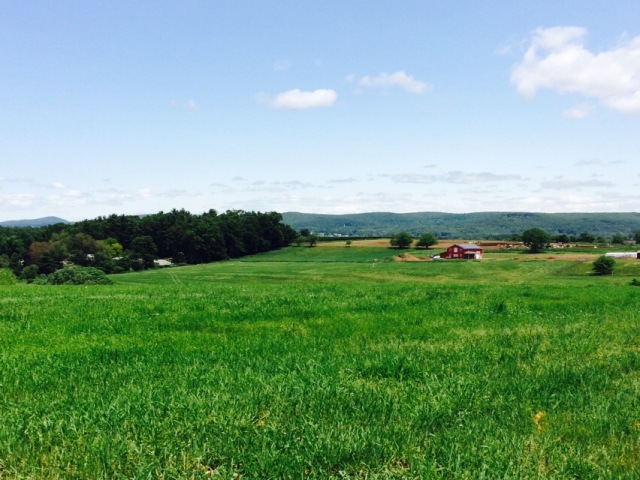 For the most part, there were gentle hills with a few 10-12% grade kickers. I stopped in Stafford Springs for lunch at the suggestion of a woman with a gravelley voice, pushing a cute child in a stroller down what appeared to be the main strip of town. She said she was from central Maine once she heard I was going that way, and told me to be sure I went to Cadillac Mountain, and Acadia, citing some place near the water that sounded like an earthquake when the waves hit rocks. I ordered a very reasonably priced special, a chicken dish with mixed veggies over rice, slathered in some sort of “Asian” sauce, and took Tunes to the park nearby to eat and play for a bit.

A bigger black and white dog was bounding around the baseball field, chasing tennis balls her owner was pinging to her with a racket. “Friendly?” I called over from far outfield before letting Tunes off her leash. “Oh yes, very. That’s Sarah,” her owner shouted back from second base. Once unhooked, Tunes literally ran circles around her new playmate with gusto and great agility. “I guess she’s done that once or twice before, huh?” Mister Owner laughed. I beamed, confirming that sprinting was one of Petunia’s greatest joys, and the dogs played together for a bit. “Can you believe,” the owner said after a few minutes, standing nearby now so that we weren’t shouting, “that she was just 4 hours away from being put down? It’s crazy. That dog is just so full of life.” I commended Sarah’s dad for being her rescuer, and soon they packed up into their pickup truck and headed off. I ate better than half of my large dish, shared some chicken with Tunes and we made our way up some more hills. A teenager on the sidewalk pumped a solidarity fist into the air and hooted, “You’re awesome! Oh, and CUTE DOG!” as I cranked through town. That always makes me smile, and never gets old.

A quick stop at Bigelow Hollow state park was a nice diversion, and I dipped my hands in the clear pond, took a few photos, and wandered around on foot with Tune for a bit. I felt my lips were a bit dry, tender and puffy– way too much salt in that lunch– and I suspected I looked like I was sporting a trout-pout As Seen On TV. Yuck. I downed the rest of my water as we strolled around the empty grounds. Leaving the park was a little tricky, as the road was narrow, steep!, and virtually shoulderless. I held up traffic a few times, especially on the way down the long hills. The roads were a bit bumpy and uneven, and going downhill, I tried to let some of the all-day pressure off my bum by riding like a jockey– staying light and lithe, hovering just over the saddle, tucking in to prevent much air resistance from slowing me down, as my horse number 520 galloped and bounced me around just a bit, but I keep it tightly under my control. And taking up the lane all to myself! I was doing just about the speed limit anyway, but I didn’t want to kill my brakes. So a couple of cars waited. People were nice. Nice is good. 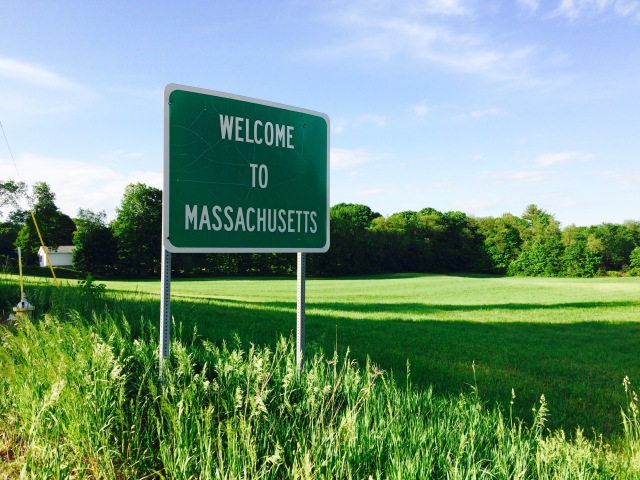 I touched the border of MA, but dipped shallowly back into northernmost CT around 6:30 PM, the witching hour for rogue camping days. I had to start assessing the local situation to determine where I might post up for the night before it got too dark and buggy, and I could feel the temperature dropping slowly and steadily. If I had hope for any type of makeshift shower, it was going to have to happen soonish. At a corner pub and restaurant, I entered with a couple of empty bottles, hoping to top off in case my unknown camping digs did not include water access. The restaurant half of the building, with repulsively colored vinyl booths and a rather warn out industrial gray carpet, appeared to be strictly for show as it was was totally dormant, but every seat at the horseshoe shaped bar was full of raucous diners and drinkers. A party of 6 was just leaving, shouting their goobyes at each other, and I backed out of the way to and waitied for them to bumble past. Finally, the bartender made her way over to me without looking up and asked flatly, “Need a menu?”  I explained that I was just hoping to fill my bottles with simple tap water. She half-frowned and thought about this for a second, until a regular there in a faded trucker hat and shirt as ugly as the seating piped up, “Sure, it’s alright! You wanna Budweiser too? Ah I bet you don’t even drink noway. Saw you ride up on your bike.” Trying to deflect the questions I guessed were coming, I asked if he noticed my little guard dog on the back as well. He whooped, “No way! I can’t believe it!”  “It’s true, I saw that there dog on her bike just as she came on the lot,” agreed another patron gripping her American beer. “Well how ’bout that?” the first one said, and for a moment I wondered if I’d taken a wrong turn out of Bloomfield and ended up in Virginia or Kentucky again. I definitely wasn’t making that good time. I grabbed my water bottles, thanked the waitress-bartender sincerely, smiled politely at the noisy crew and took off. Before I made it to the door, trucker hat bellered, “So whaddya camping or something?” “Yup! We’re on our way there now. Have a good night, y’all,” I grinned and ducked out.

Not far down the road was the road, I noticed a favorite road sign (besides the ones telling the grade of the coming downhill rides), a yellow diamond with a black firetruck in the middle. Bingo! A couple tenths of a mile away stood the local fire department, a shiny big building built in 2008, according to the sign above the door that I noticed while I was casing the joint. I knocked at the doors, but there wasn’t anyone around. Behind the building was a little alcove with just enough space and privacy to be considered a perfect spot. Plus, they had running water on the front of the building, and even an electical outle that I likely wouldn’t even need. So I set up tent, took Tunes for a last stroll, ate my leftovers from lunch and a big handfull of almonds, cashews, and dried cranberries, and set about doing my evening cleanup. After my makeshift and refreshing shower, I went to refill the bottles, and realized that the water had been sitting in the pipes all day and was really warm. Drat, coulda had a warm scrub. I’ll have to remember to check first next time. The temps were still falling, so I pulled on a wool overshirt, and snuggled in for the night, listening to the mechanical sounds of some machinery clicking on and off, a fan running, and whatever kinds of noises were coming from the cell phone tower that I appeared to be under. It was a safe home for the night, I was clean, I rode a solid 53 miles (33 more than I hoped!), and that was good enough for me.