I patronized the little market for breakfast as a token of my gratitude for their free camping for cyclists service, fed Tunes some meat and cheese on top of her dog food, and we quiescently cruised about 20 unpeopled miles along various creeks and parts of the Salmon River. In Osceola, its “world famous hotel” was a ghost-town relic, desolate, except for its banner announcing its upcoming “world famous turtle races.” I didn’t get my own photo, but an image search turned up this pic from snowmobilingusa.com that sums it up (minus the people and the snow).

About 25 miles later and around 1-2 PM, we arrived in the center of Pulaski and called our hosts Kit and Lou to make sure it was okay we were arriving so early. Kit warmly welcomed me over for lunch, and she offered some fresh and local veggies, some cut tropical fruit, and she had great news– they were going kayaking and had managed to borrow a third kayak for me! We piled into the car and made a short trip Lake Ontario, where we put in and had a fun paddle for a couple of hours. Kit, a super down-to-earth high school science teacher, triathalon warrior, and outdoor adventure enthusiast, was a lot of fun to get to know as we hugged the shore of the lake and gabbed about our adventures and other cyclists she’d taken in over the last few years of participation in Warm Showers. Petunia curled up on my lap, sometimes resting her head comfortably on the cockpit rim, and once standing up at full alert to warn a red buoy that it was much too close and scary. 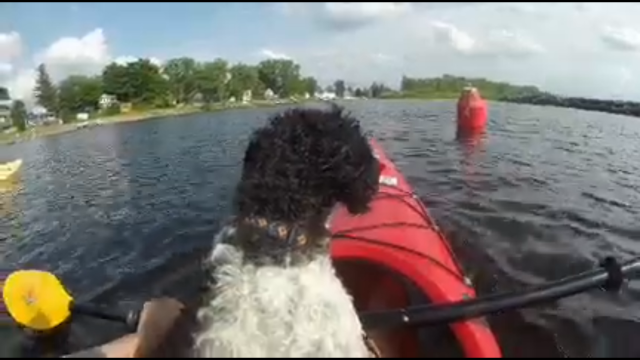 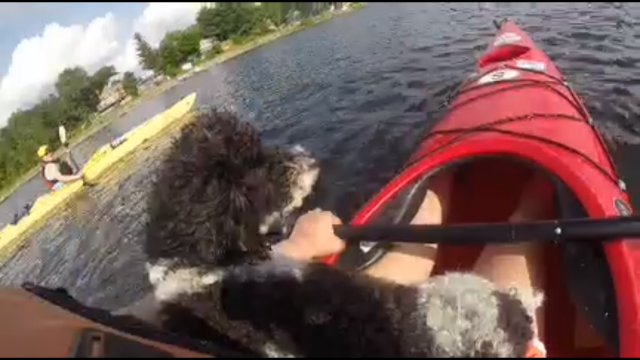 When we returned to shore and rode back to their neatly and lovingly-landscaped home, I put some quinoia and rice on the stovetop and Kit picked the last of the asparagus right out of her garden, and we grilled it up along with some broccoli and chicken. Our tasty meal was enjoyed right outside on their cute front porch, and we watched a few of her Amish neighbors ride past the house by via horse and buggy.  Following dinner was a thorough garden tour, accompanied by their two dogs Porter and Benson. Landscaper Lou identified the nursery-rejected and almost thrownaway greenery he’d rescued and tenderly nursed back to health, including an ornamental pear tree, some evergreens, shrubbery, an exotic assortment of lime and hunter green hostas. They seemed especially delighted by one ten-foot-tall bewildered looking Charlie Brown Christmas tree, conspicuously occupying prime real eastate on their front lawn and bearing a few lopsided branches that appeared to have been practically plugged in to its lanky bole. “It gives the neighbors something to make fun of us for,” Kit said with amusement.

Below: Kit, Lou, Benson, and Porter.

We slept soundly in their spare bedroom, and were treated to a hearty breakfast the next morning. Anita wouldn’t be arriving in Rochester until Monday evening, so Petunia and I had another day and a half to get to the city. With only 115 miles, this meant that we had another vacation-paced-pedaling day. Along our route, we met a new friend and fellow cyclist Albert, and chatted about our trip on the quiet backroads which allowed for double-file riding. Albert stopped to rescue a small painted turtle from the road, and then rode in solidarity with us all the way to Fulton, where I was generously treated to lunch on a lovely outdoor patio alongside the Oswego River. We met a man named Brian whose two daughters thought Petunia was nifty, and his family wished us well on or journey. 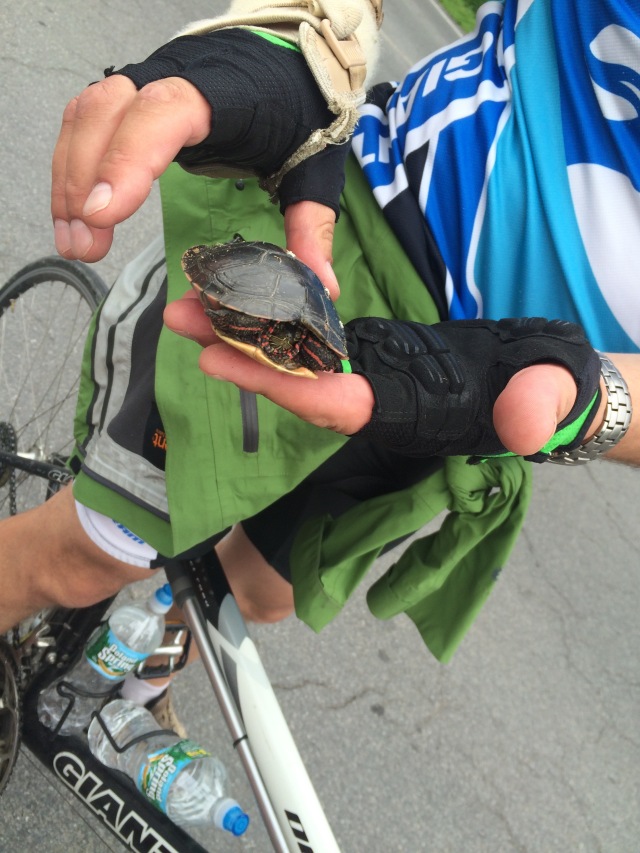 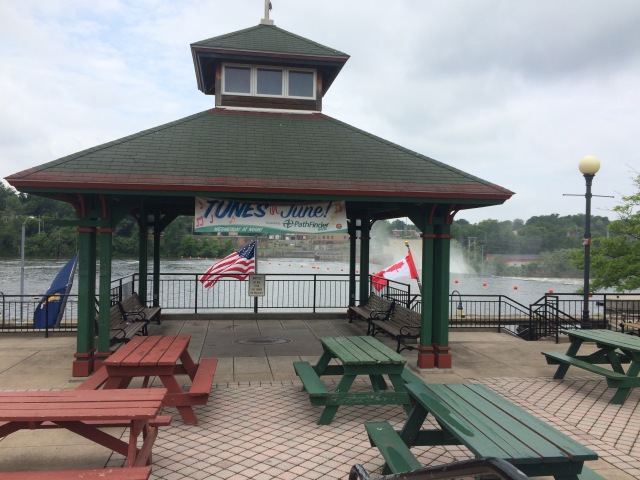 A few miles later in Hannibal, we parted ways with Al, but not before he gifted Gearing Up with a munificent donation. I’m getting quite close to my goal, and it would be an amazing honor if we met it and even exceeded it. Once again, I’ll refer you to my safe donation page, and I’d like to thank everyone who has so thoughtfully and graciously given to this organization which helps women in transition from abuse, addiction, and/or incarceration by providing them with the skills, equipment, and guidance to safely ride a bicycle for exercise, transportation, and personal growth.  If you feel more comfortable donating cash or by check rather than online, please contact me so we can organize this (email touringtunes at gmail dot com).

Sunday night, we were close to Sodus Point, and so with darkness quickly arriving and with nothing in view but miles of vinyards and apple, cherry, and pear orchards, we found a quiet spot to rest for the evening and tucked in among our planted surroundings. We leave no trace, do no harm, and pack and go with the sun. As I went walking I saw a sign there, and on the sign it said “no trespassing” / But on the other side it didn’t say nothing, that side was made for you and me. 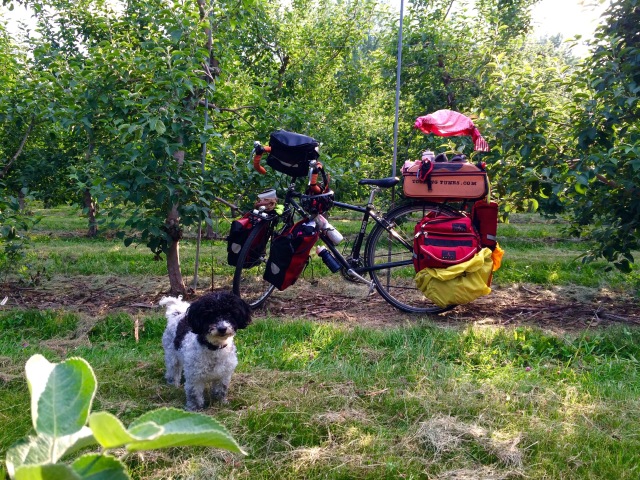 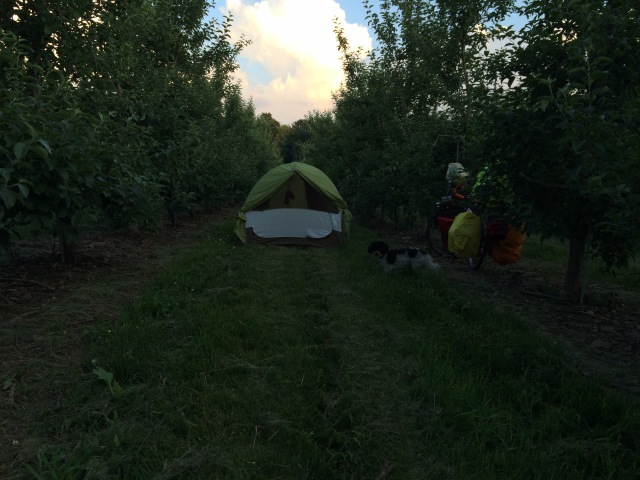 Songs of the day: Casimir Pulaski Day by Sufjan Stevens

…and This Land is Your Land by Woody Guthrie. Bonus version: https://www.youtube.com/watch?v=bphP7Hh_gxU  features the images and voices of Woody and Arlo Guthrie, Holly Near, Pete Seeger, Ronnie Gilbert, Judy Collins, Joan Baez, Hoyt Axton, and others.