Sunday was a big day for me. I rode my longest day ever while touring. Actually, I think it was just plain old my longest day on a bike. I got an early start from my churchyard campsite, ran a couple of early AM errands in town, and booked it along the very-flat Route 5 through the last few towns in New York. The rain alternated from drizzle to downpour with an average of just wet, and the scenery was mostly residential or vineyards and cherry trees, so I just hauled it at a fast clip. In a few places, I got a peek through the trees at the vastness of Lake Erie, but for the most part I kept my eyes on the road and scanned the shoulder for nails or rocks or any other tire-puncturing debris. 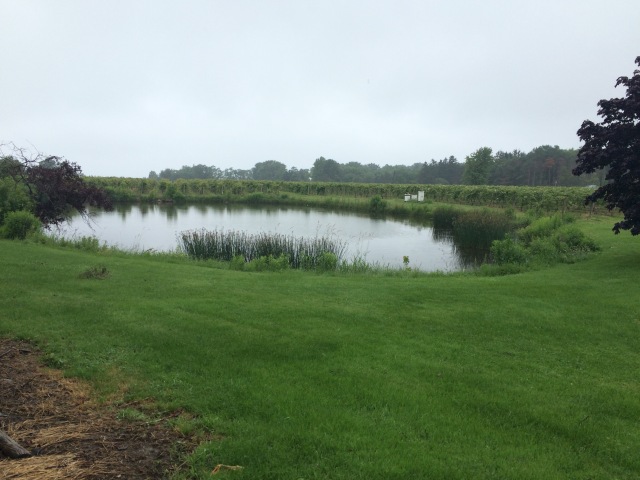 I’d gotten the OK from a WS host named Leo to spend the night indoors in Erie, PA, so I’d be crossing state lines one more time. I kept my spirits up all day by listening to the radio and being a goofball.

I just kept going and going, stopping only for quick lunch and for a few good Tunes breaks. I had plenty of time to reflect on the past 35 days since I left New Jersey. I’d cycled for 29 of them (5 days off in CT during the storms, and 1 day off in NH, though I guess I’ll count the days spent in Rochester since Anita and I did some recreational cycling). My top speed had been 45.2mph (the Poconos, I think), and I estimate I average about 9.5 miles per hour. On the flat roads I roll at about 13mph, though my bike computer no longer calculates the average since I pushed my rig uphill so slowly in a couple of places that even though it registered the distance was increasing with each laggard wheel revolution, the speed was <1mph, and it couldn’t handle that division. I’d changed saddle height and position three times, shed five pounds last I checked but gaIned muscle definition and tree trunk quads;  lost one pack cover and one glove but came by some low/no cost replacements.  I’d been bitten by one standard poodle on the hip and one black fly behind my ear, suffered one still suppurating leash friction/burn wound on my ankle when Tunes bolted away from a scary big-dog pack, cranked along with two faulty knees, aand squeezed out one entire tube of muscle-rub gel. I’d also  traveled through 9 states (sometimes reaching a different part of the state lines more than once, as I’d taken a circuitous route) and covered 1,500 miles, racking up over 6,000 total miles of bicycle touring with Tunes. I was keeping my quantitative and qualitative data analytics skills sharp as well, it seemed.

Twenty miles from my destination, a road cyclist in a neon yellow jacket and matching helmet-bonnet that kept his head dry rode alongside me and said that I was riding up one particularly not-flat hilly spot at an impressive speed considering how burdened I was. I thanked him and told him I’d had a lot of practice in the past 1,500 miles. “It’s funny,” he said, “but just this morning, I was wondering what someone would wear if they were gonna be out riding in this rain all day long.”  “Well, I went with a useless jacket and plastic bags over my socks, and I’m still going.” I was on a quest, gunning for my first century day, the cycling bragspression for going 100 miles in a day.

The last two miles to Leo’s house were really uphill, of course, and I stayed on my bike but I practically crawled there and arrived around 6 PM. With a slightly competitive compulsion, I checked my bike computer as I pulled in the driveway. I’d pedaled 99.1 miles in a day. I re-checked my public school math, but that was the final answer. I thought about riding down the street to make it an official, even numbered century day, but my bum pain and my soggy doggy decided for me that close enough was enough. Leo and his black Lab-mix Buddy greeted me in the garage, and Petunia ran around the lawn with her new playmate in a zippy game of tag. Sufficiently drained, I stumbled into their abode, where Leo laid down his house rules for me. “Rule Number One is that you make yourself at home,” he said, and handed me a helpful list of other useful commandments for staying under his roof. His loving partner Bonnie served up a tasty meatload, veggie, and potato supper that I inhaled, and she even made dark chocolate brownies with fresh strawberries and whipped cream! It was heavenly. From the first time I talked with him on the phone, he sounded like a really laid-back and good natured guy, and Leo was truly the real deal. After surviving a massive heart attack a few years back, he decided to live life to maximum capacity and bicycle toured across country via a modified TransAm route with some friends. It was clear he cherished every day, and he loved to talk bike touring! This was fun, and I wanted to hear more of his stories, but with a belly full of food and 99 miles freshly under my belt, I could hardly sit down. I watched a few minutes of TV with them, an unusual activity for me (and an unusual show– Naked and Afraid? Whaaat?) and then excused myself to bed around 9ish. As I fell asleep, I heard a documentary about Glen Campbell and his Alzheimer’s diagnosis and how he lived with it, which reminded me of my Grandma Judy back home in CT. Bonnie told me his song I’m Not Gonna Miss You was his response to it.

When I came to in the morning, Leo’s two year old granddaughter Olivia was there for family daycare. Cute as a button and curious about Tunes and me, she was definitely the pride of the household. When she saw me brushing my teeth, she dragged a stepstool over to the sink and emulated my hygienic efforts. Slightly self-conscious of my role model status,  I carefully coached her and congratulated her on her dental health.

Every bit the doting grandparents, it was fun to spend the morning with my  new friends as they steered Olivia towards a half-eaten apple and laughed as she spread herself across the living room floor with Buddy and Tunes in puppy wonderment. “I used to  care about things lke messes,” Leo said after he related a story about Olivia’s crayon artwork on the walls, “but that stuff just doesn’t matter to me anymore.”

We couldn’t get Bud to sit still long enough for a good group shot….