She’s Got a Ticket to Ride

Posted on September 5, 2016 by TouringTunes

It’s hard to say whether I would have felt more serene today if I’d had longer to prepare for this moment, or if it would’ve just prolonged my state of being a welping, excitable basket case. The impulse to ride my old Craigslist bicycle across South Korea with my dog and some strangers I met online was not something I would have organically dreamed up by my onesies. But when I accepted David and Emily’s invitation about 6 weeks ago, my instant reaction was to think, well, yes, don’t mind if I do!, and, why would I NOT do that right now? Petunia and I had two cross-country tours behind us, and and plenty of spunk left to accept a challenge that took us far away from our domestic comforts. On relatively short notice, the game was to figure out the logistics involved in transporting a touring rig, a dog, and a nervous flyer over 9,000 km around the world to cycle in a country where I did not even know how to say hello or thank you in the native tongue. But I do enjoy a good puzzle, and so I bought a plane ticket, and naïvely asked my future hosts whether or not I’d need to pack my water filter.

The dark winter I’d spent in Connecticut was softened one day by an email I received from someone who came across my TouringTunes blog. The polite missive indicated the author was an American teaching English in South Korea with his wife, and that they were considering embarking on a tour of their own with an adorable 10 pound dog. They’d found me through a Google search, and sent their message across the universe to me, with self-described uncertainty as to whether I’d reply and answer some of their questions about touring with a dog. And shortly thereafter, we met by Skype, and had a lovely and giddy chat, being three dog-and-bike-and-travel-and-adventure nerds. So that’s how I first came to be in contact with David, Emily, and Kodi the pup.

We had a few more conversations, as my relocation adventures first took me on a temporary stint in Florida, where I sent them photos and videos of my bike and dog carrier as it hung outside with the lizards and sandy boardwalks. As I drove across the USA to gaily relocate in spectacular Missoula, Montana, we continued to stay in touch. Meanwhile, David, Emily and Kodi were on travels of their own, and I eagerly followed them on Facebook as their dog-touring dreams materialized in their flight from Korea to Maine, where they then rode all together up to Toronto. It was so exciting seeing them make it, and I thought it might feel a bit like what some of my friends following along with my travels must have felt as they cheered me on along the way. It was a vicarious thrill, plus I felt a bit proud and tickled to have contributed in some very small way, even if just by being a friendly resource or an example of someone who’d done it successfully. And most of all,they seemed like very lovely, down to earth, kind, compassionate human beings. Plus their dog was ridiculously cute. 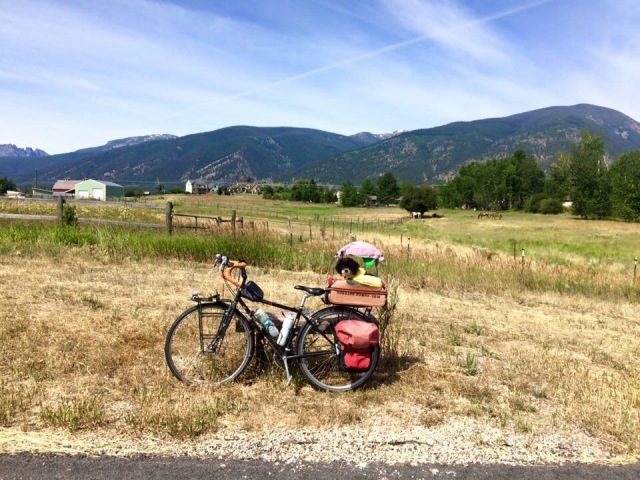 So when I got the Facebook message on July 30th, “Riding the Four Rivers Path again (Seoul to Busan) over Chuseok (Korean Thanksgiving) September 10 – 18… Interested?,” I got that old familiar gut feeling, like it was something I knew I was going to do even before I knew how I was ever going to do it. In my messenger inbox sat an incredible opportunity to ride with like-minded folks in a place that was very unlike anything I’d experienced before. I was so in.
And it’s been a dizzyingly exciting few weeks, trying to get all of the moving parts together… literally…. Learning how to disassemble my bicycle and box it up myself, with a little (okay, a lot) of help (and bubble paper, cardboard, and packing tape) from my friends; and learning what’s involved in international dog transportation (answer is: money and paperwork and an awesome vet and patience with airline call center reps).

But as challenging as the technical details were, I did as much work in my head and heart– did I think I was up for this, after being somewhat physically broken by a bad car accident and a back injury during the fall and winter, and an embarrassing lack of exercise over the summer? Was Tunes up for three back to back plane flights, the longest of which was 11 hours straight? Could I afford this? Did I have enough time to get all of this stuff ready, while working as a consultant and ersatz housekeeper and stoking a busy social calendar with all of my new friends in my new home town, and being a tour guide when my wonderful mama came to visit just a week before departure? And for exactly how long would I kick myself if I let this chance pass me by because I was buried in self-doubt and forgetting what a beastly badass I am?

So here I am, 40,000 feet up in Russian airspace, having these thoughts interrupted to listen in on the impressive verbal gymnastics executed by a couple of flight attendants. One of each must be from our country of departure and country of arrival; they speak about 5 languages a piece, and are steadying themselves using the overhead compartments as they imperturbably serve tin foil cafeteria meals during a bit of mild turbulence:

“William do you have any more butter?”

I’m envious of their polyglot status. Happily, I have found a pretty worthwhile interactive language-learning game on my built-in headrest backer video screen. So I try to educate myself with the basics in Korean. Depending on which YouTube tutorials I watched the night before, the Gs were pronounced either c’s or G’s, and ohs are ous, sometimes, and the vowels tumble clumsily from my dumb mouth. But I like languages, and I’ve got nothing but time to learn now, and I plod on, listening to the phrases and words in the mysterious Korean alphabet and transcribed in my accessible abcedary style. I chant “gamsahamnida” quietly to myself like a prayer, trying to make sure I can remember how to at least say thank you and be a polite, even if grossly ignorant, tourist. The helpful conversational phrases are very hard for me to remember, without my Latin roots to anchor the sounds to, and I decide to learn some words instead.

A little vocabulary video game comes on, and right off the bat, they’re teaching the important words: maek ju is beer! Kae is dog! Po keu is fork! (I remember this one because it sounds a bit like poke you, which is totally what you do to the so go gee (beef) when you ’bout to get your microwaved airplane eats on. I take an animated quiz and feel pretty good about learning some new words like a little kid, and I want to hug all of these worldly flight attendants. Then I realize I do know the word hello after all, because Arrested Development has corrupted me. Pro tip: annyeong is actually the informal way to say it, but one should really say annyeonghaseyo, which it turns out is a very beautiful greeting. Sort of like mahalo or asalaamaleikum, it’s got heart, because it literally means, “are you at peace?” The more you know. 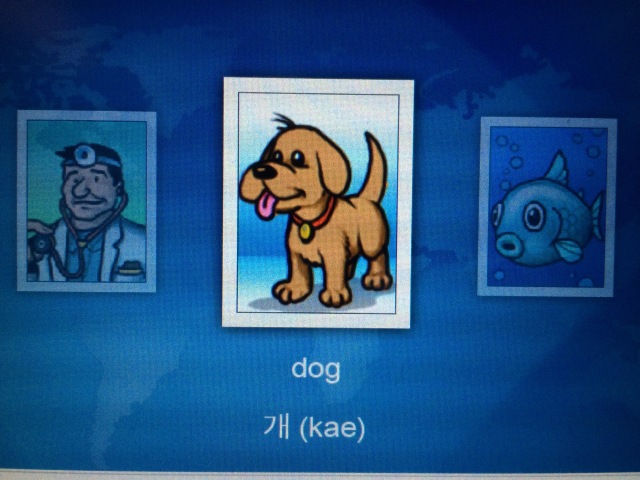 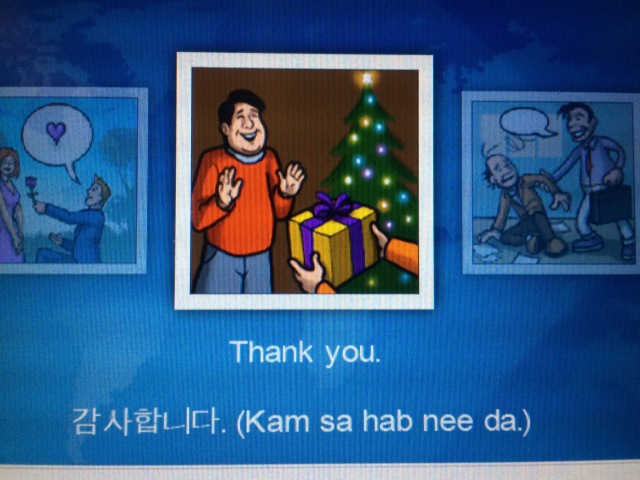 (Sometimes the best seat mate is no seatmate?) 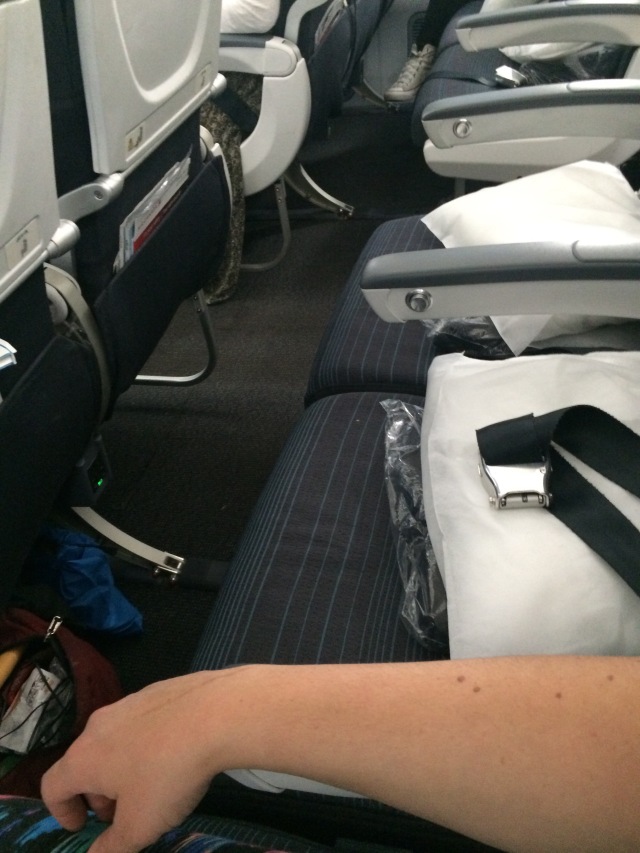 They’ve just stopped serving the pork japchae and noodles meals, which I definitely covered in that tiny packet of hot red chili sauce that came with the tray. Even considering how I’m 324% more likely to eat anything when I’m airborne and strapped in a tiny seat for some reason, it tastes quite good. I am ready for some land food though. It is strangely nocturnal once again in here now that the service lights are off and everyone’s got their blackout windows totally darkened, despite the fact that it’s the middle of the day in exactly all of the time zones we’re chasing the sun through. I quietly slip my sleepy Petunia out of her under-seat-stowed carrier and onto my lap. She was completely undetectable under the thin blanket provided by the airlines where she snoozed peacefully, and we kept each other sane and cozy for a couple of hours. I’ll be sure to pop her back in her carrier before Carol comes around again, the very sweet lead flight attendant who came over to talk to me before we took off. Originally, the airline’s phone rep told me Tunes would have to remain in her carrier under the seat for the entire flight, even though she’s an ESA and sits placidly on my lap on all domestic flights. But Carol came over and told me I could at least put the carrier on my lap if I wanted, as long as I didn’t open the zippers. “We had a pet escape just last week and it was total chaos.” I know I’m totally biased, but the only way I can conceive of Tunes causing chaos on a plane is if everyone gets up and comes and takes her picture and lines up in the aisles to tell me what an awesomely well-behaved dog she is (several people have come up to do this before we even boarded).

It has been a pleasantly untroubled trip so far, fourteen+ hours into our journey. Our peregrination began blisteringly early at 3:30 AM, although, considering I didn’t really sleep last night, I suppose it started at some point yesterday when I was still packing well past 10 PM. After all… It was the night before Cheusok, and all though the house… Well, kinda. (It’s still a few days away.)

About five hours into ths flight, I’d already seen a movie in which I actually disliked Kate Winslet’s performance (what was up with that inconsistent American-Polish accent in Jobs?), had listened to a bizarrely sanitized Kidz Bop cover of Drake’s Hotline Bling (“you used to call me on my cell phone/when you wanted to talk” ….uhhhh, okay), and ate half a bag of Golfisheses (blerg). I think it’s time to catch up on sleep and see if I can manage an upright nap now. We’ve got a long day (night? day? Yuhdi uhdi aeyo?/Where am I?) ahead of us.

Song of the day: The Beatles – Ticket to Ride

4 Responses to She’s Got a Ticket to Ride