From Kentuky, through Illinois to Missouri

When last we blogged, we’d left Whitesville and had a very pretty day cruising by vast farmlands, enjoying the sunshine in the morning and afternoon, even though rain had been forecasted. At one point, an old farmer with a beer nestled in a beer koozie pulled up to us in his red pickup and asked if we were alright. “Just taking a water break,” we said.
“Taking a what?”
“Taking a water break.”
“Taking a watermelon? It’s too early for that. They aren’t blooming yet.”
“…[awkward smiling and laughter]” 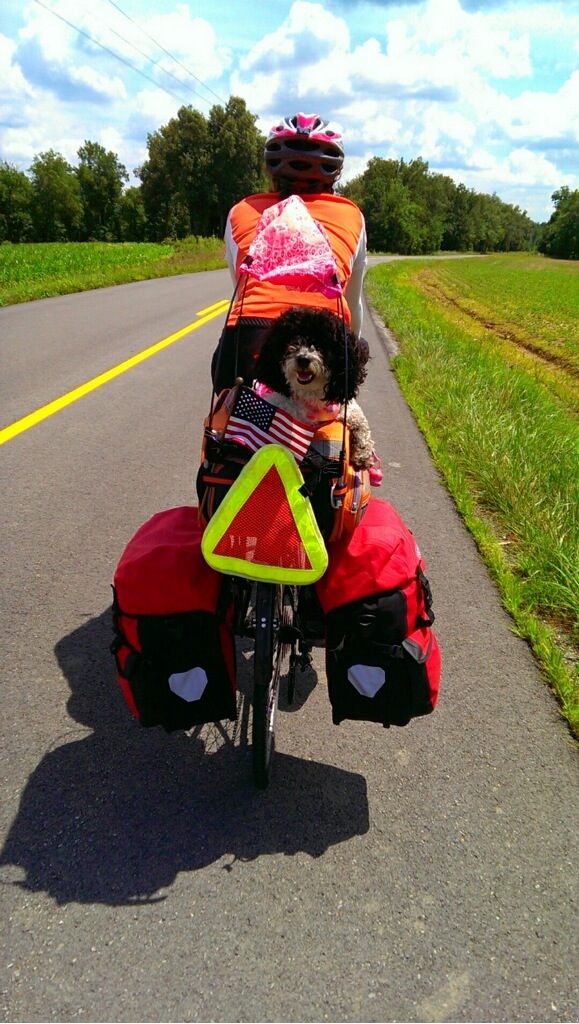 Petunia keeps looking back to coach Greg, who rides behind us because we have discovered that whenever he rides ahead, she makes these little monkey-baby-like cries. She doesn’t like to be the caboose. Speaking of trains, they sure love their coal in Kentucky, where everyone is “friends of coal” and has bumper stickers, t-shirts, and lawn signs to prove it.

It finally started to rain as we got close to Sebree, KY. At about 5 PM, we pulled up to a church that was listed as a cyclists-only hostel in town, and called the number listed on the door. A woman named Violet picked up the phone and told us she’d be right over from the house next door to the church, and she appeared right away and took us to the church basement. This place was absolutely immaculate- it served as a sort of community center, storm shelter, and also a perfect haven for bicycle tourists. It had a shower, real towels, a huge map for cyclists to pin their home town, big comfy couches, mattresses to sleep on, a full kitchen, wifi, free laundry, and even some snacks in the fridge. Violet told us to cast off our wet clothes, enjoy a warm shower, and get ready to come over for a home made dinner in an hour.

Violet and her husband, Pastor Bob, made us what seemed like a Thanksgiving dinner- tender pork chops in gravy, lima beans, zucchini and squash, biscuits with strawberry jam, cornbread, cantaloupe, rice, corn, and blondie brownies with vanilla ice cream for dessert. It was pretty wild. They kept encouraging us to eat more, and we certainly did that.

During dinner, Violet shared stories about some of the many cyclists that the church had hosted since ’76, including two families of 12 people riding on 6 tandems; someone who rode across on a unicycle and another who crossed on a penny-farthing (the old time bikes with the huge front wheel and tiny back wheel); a man who was paralyzed from the waist down who hand-cranked his special recumbent bike, towing his wheelchair and getting in and out of each without assistance; a newlywed couple touring the world on a tandem recumbent bike, and other amazing journeys.

Petunia wasn’t allowed into the hostel interior because a student there has extreme dog allergies, but she was allowed to stay in the foyer where we set up a mattress and she was snuggled all night. How much is that doggie in the window? The one with the trucker arm.

The next day, we got to cross the Ohio river by a short ferry ride, and changed states in doing so. 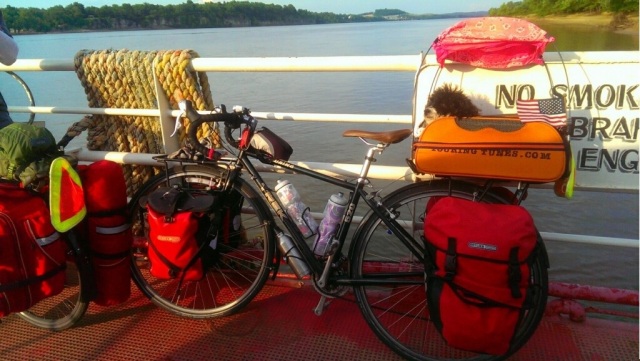 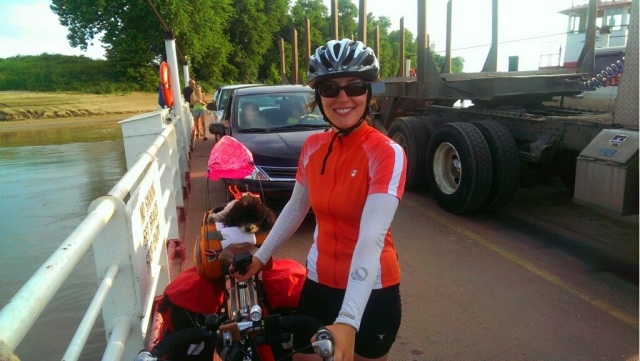 We stayed at Cave In Rock, Illinois, where we met the first two women cyclists we’d encountered on the road! Karensa and Katie were from California and were riding from DC to the west coast, back home. We were riding at a similar pace, so the next night we split a campsite at Ferne Clyffe state park. As it turned out, Katie had recognized Petunia from an article about our trip that her brother’s friend wrote in April on a site called Visual News. It’s a small cycling world after all! 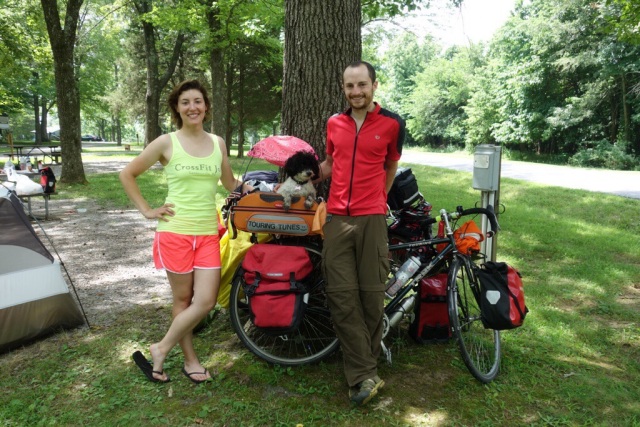 Some other campers had warned us about raccoons on the prowl, so we all put our food in panniers and stashed them in the camp bathrooms overnight. So we were surprised to hear some scratching and munching coming from our bikes next to the tent at 1 or 2 AM. Turns out they had broken into my first aid bag and ate through a few Pepto Bismol packets and some other non-food items. After we scared them off, we heard the weirdest animal noises in the woods!

The next day was a planned low-mileage day to give our sore seats some rest. After carefully going through a dirt and rubble road that was closed to cars (but not to cyclists who had been previously tipped off by east bound cyclists), we pulled over for a water break. Moments later, a tall man on a blue tractor pulled up and introduced himself as Rick, a local and a fellow cyclist. He kindly offered to let us stay the night at his place near the city of Carbondale. It was still early, so we followed his tractor a mile down the road to his beautiful home on a lake that we later learned he engineered. We met his wife Suzanne and one of their daughters, Sarah. They let us unload our gear, shower and watched after Petunia while we ventured out sans-panniers to get Thai food for dinner. We’d exchanged phone numbers with Katie and Karensa, so we communicated, and realizing that they were in the area, we all converged on the restaurant for curries. Rick and Suzanne generously extended their hospitality to our new friends, so we all pedaled back in the dark and slept peacefully indoors on the pull out couch and beds they’d made up for us. 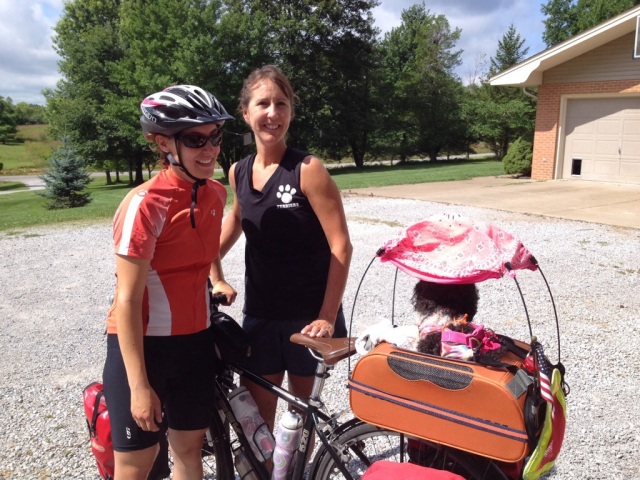 The next morning, we shared touring stories over an amazing breakfast that Rick made for us all- biscuits and gravy, a delicious fruit salad, homefries, and coffee. It was such a heavenly way to start the say! Katie joked with our hosts, “I wondered how you slept knowing there were four strangers in your basement,” and we all felt so lucky for the coincidence of our meeting.

The next day was hot and humid and we were again following our friends westward towards a cyclist only hostel in Chester listed on the map. Greg accidentally rode over a broken bottle on the shoulder and got flat number 3, with multiple punctures to the tire.

The sun was setting as we were in the flat levee area of the Mississippi River alternate route, so we didn’t have many options but to push hard and pedal fast as it got dark. Then the rain started, and the mosquitoes came out in full force. It wasn’t until well past 10 o’clock that we arrived wet, hungry and dirty at the tiny 8’x10′ 9-bunk wooden barracks style hostel. 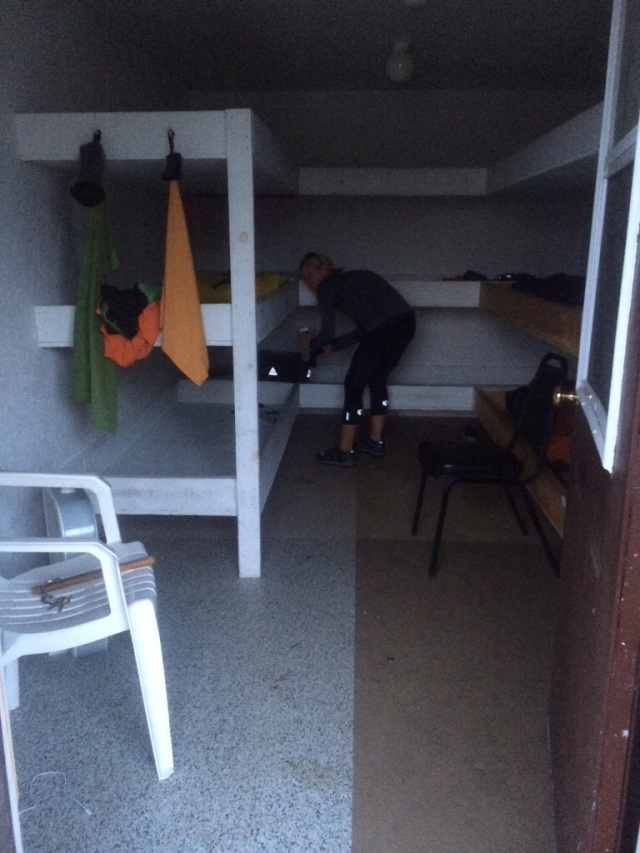 Shortly before we collapsed onto our respective planks, we learned that one of the 5 other cyclists crashing there for the night was competing in the west to east TransAm self-supported bicycle race, and he was in the 15th position. Marcus had just completed a 110-mile day (his 5th lowest day, he said) and he was kind enough to talk with a few of us for a while. He told us about what he ate (“absolute garbage– $25 a meal at McDonalds, gas station ice cream for breakfast”), what he carried (he’d just sent his sleeping bag home to reduce weight, and therefore slept on bare wood that night), and how little rest he got (he stealthily crept out of the lodging at 4 or 5 AM). He was fascinating and told us stories about the other racers, including the fact that the winner completed the race in about 17 days.

The next day, we peeked around Chester a bit, which is the home of the creator of Popeye. 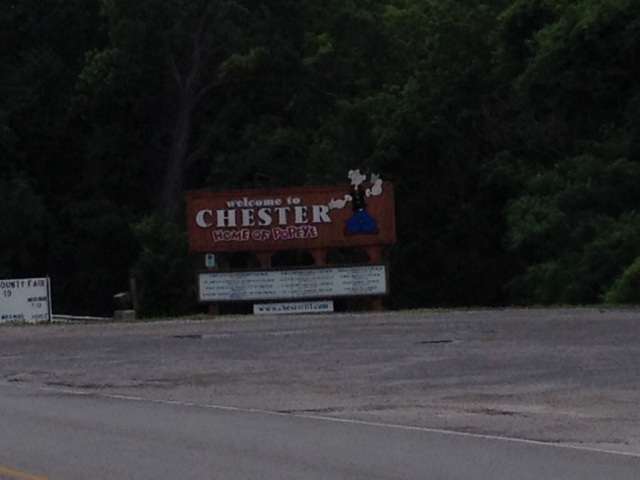 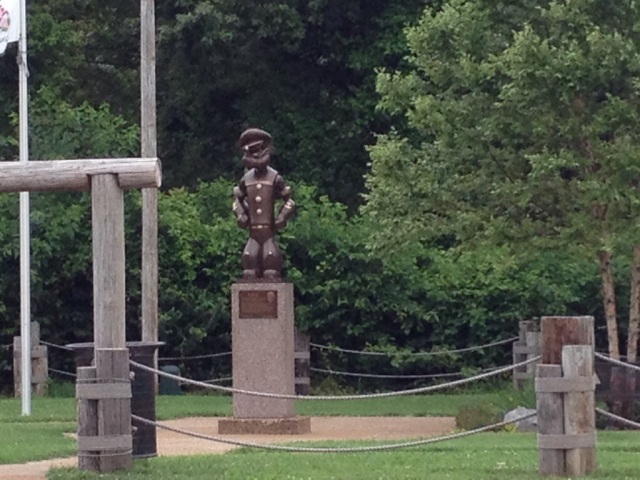 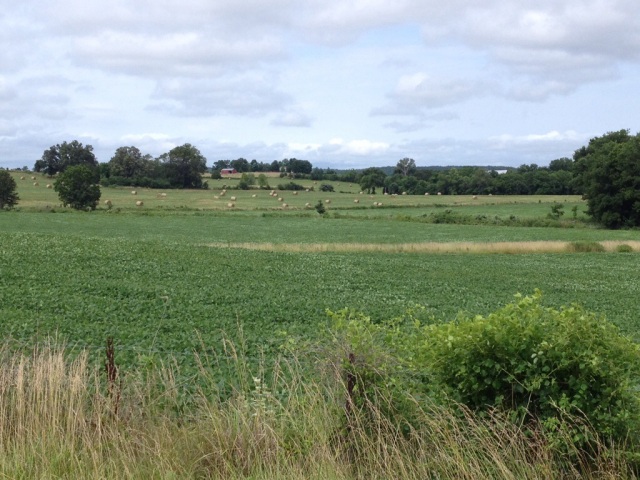 Then we crossed the Mississippi River by bridge and made it to Missouri! More stories to follow. 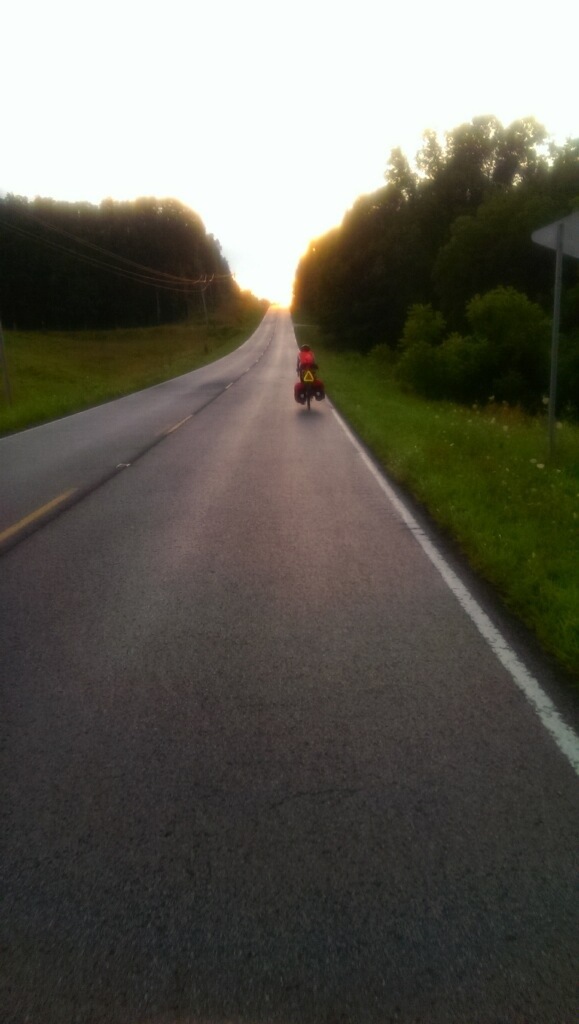