Tonight I’ll Be Staying Here with You

The morning we left Chester, IL, we ran into the TransAm racer who was in the 16th position, just behind Marcus, the ninja cyclist we’d met the night before. We provided directions to the eastbound Mississippi alternate route, and he told us he and Marcus were part of a group of 4 racers who were stuck in a snowstorm together back in Colorado. While holed up in a hotel room waiting for the storm to pass, they’d made a pact to complete the race all together, seeing as how the leading peloton were already far ahead and the rear group wouldn’t be able to catch up to them. It turns out, according to racer #16, that Marcus snuck out of the hotel in the middle of the night, breaking the pact to gain an edge, and with a competitive glint in his eyes, the racer in Chester told us, “I’ll definitely catch him.”

We made it to Farmington, MO that evening where Katie and Karensa were staying at Al’s Place, a former jail now turned upscale hostel for cyclists only, along with three or four other small groups of cyclists. It was like The Real World of Bike Tourism, with everyone staying up late to talk story. We met three cyclists who are headed east, and as they are all starting medical school this fall, have dubbed themselves “The Health Nuts.” They shared some great tips about their experiences out west (a good warmshowers host in Montana) and some horror stories (headwinds and 113° heat in Kansas that meant it took 5 hours to cover 20 miles). They loved Petunia, which was really great since we all shared a room with bunk beds! 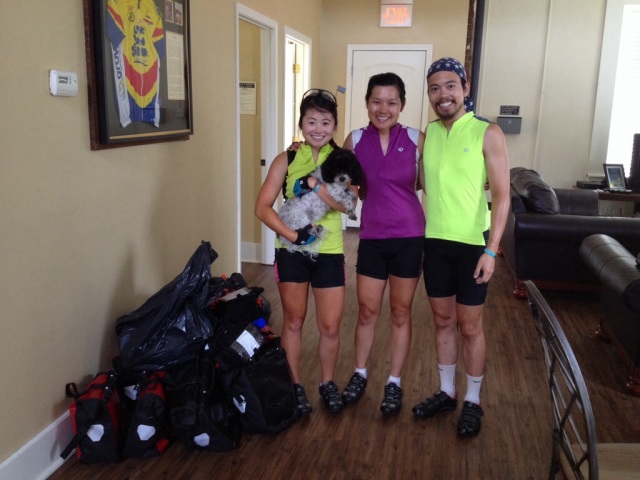 Jamie’s left hand has been crimped into a claw and painful for a week, likely the result of cyclist’s palsy (ulnar neuropathy). At least, that’s the Google search diagnosis so far. This may be due to to not wearing padded gloves after one flew away back in Virginia, plus rode vibrations and not keeping a “neutral wrist” position. Al’s place was so nice that we decided to take a day off there and rest the hand a bit. 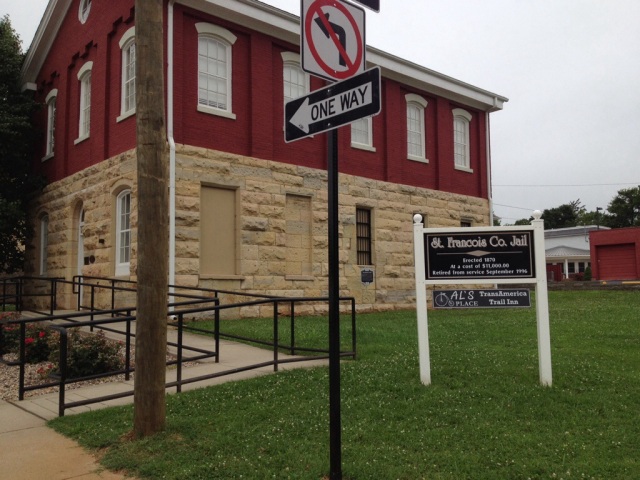 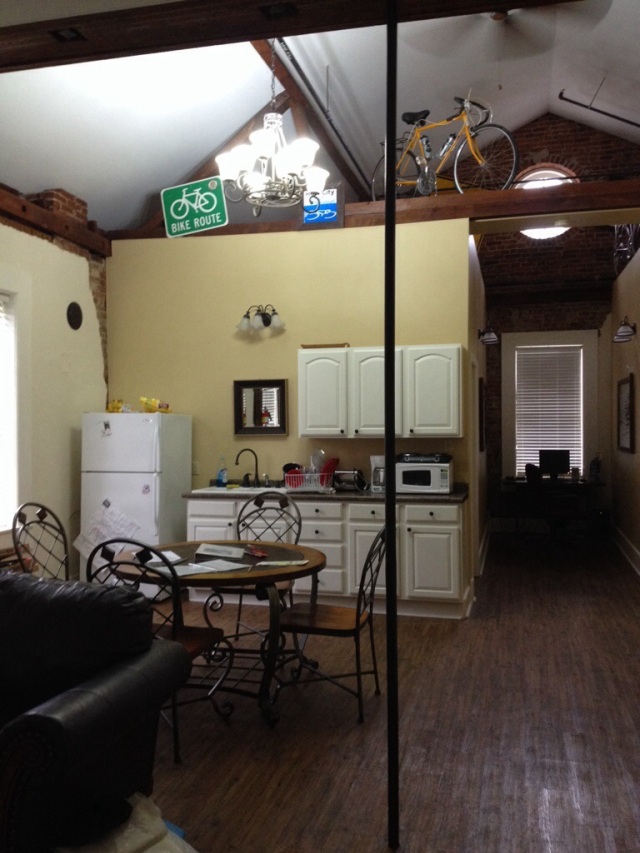 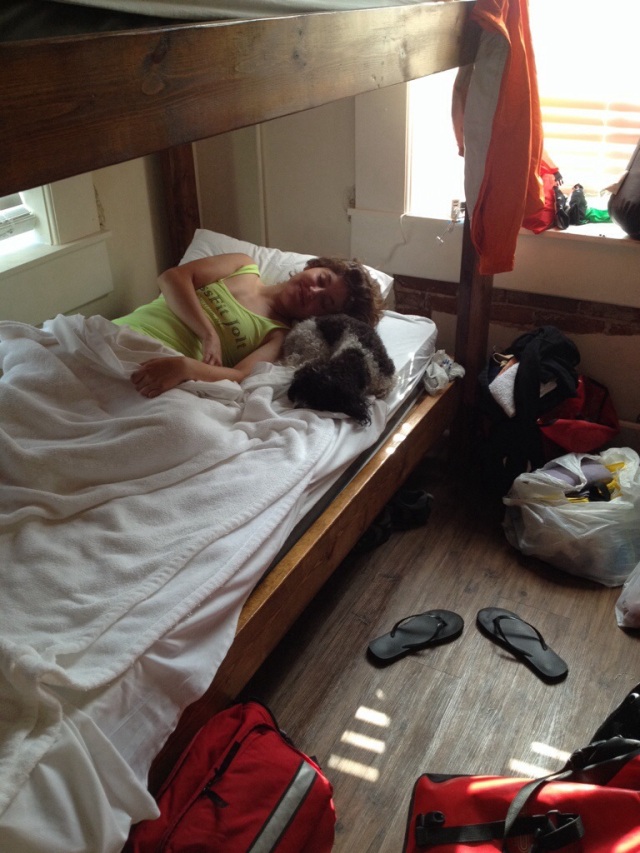 After a nice weekend at Al’s Place, we attempted to head out after breakfast and resupplying, when suddenly a loud hissing emanated from Jamie’s front tire. After a failed patch attempt, we realized the big hole in the sidewall was going to call for a new tire. So back to the bike store in Farmington we went. Petunia made some new friends there and ran around and around, and even tried on some bike-streamer weave. 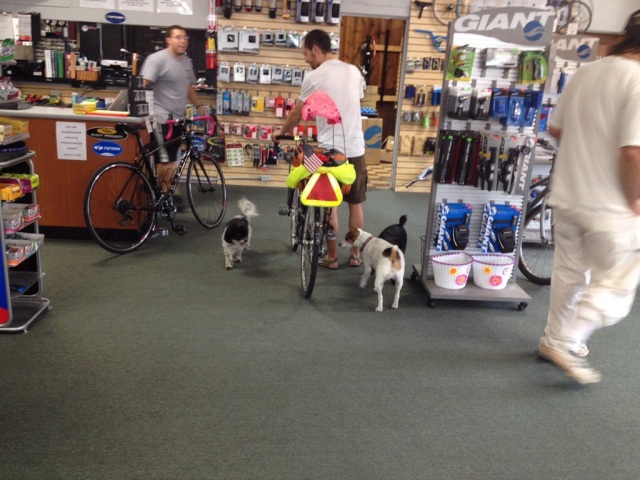 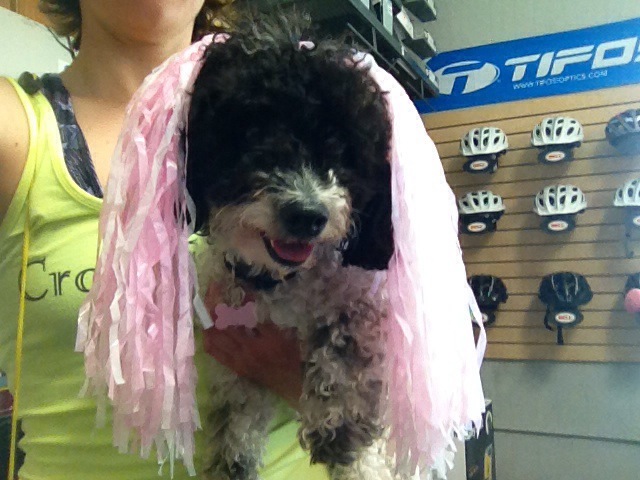 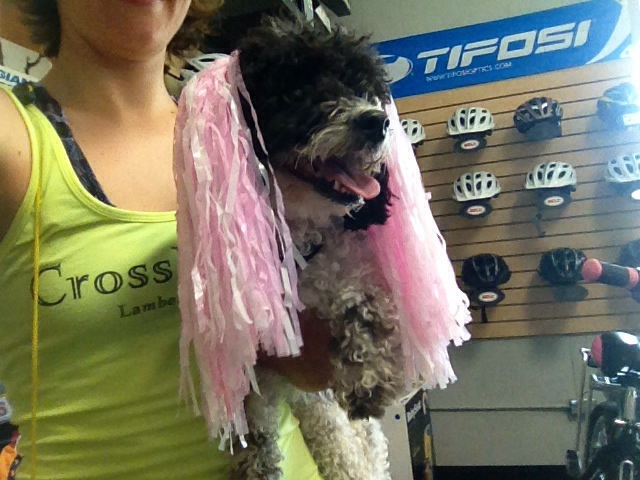 After some hilly riding with some aggressive drivers (we’d been warned about this in Missouri and sadly our sources were right), we were forced to delay due to a pretty serious storm, lightning and driving rain included. Finally, after a short-mile day, we camped out at a state park, arriving at dark and riding around parking lot-sites full of cars and tents. It looked like suburbia just packed up for the weekend and moved in, cable television and all. 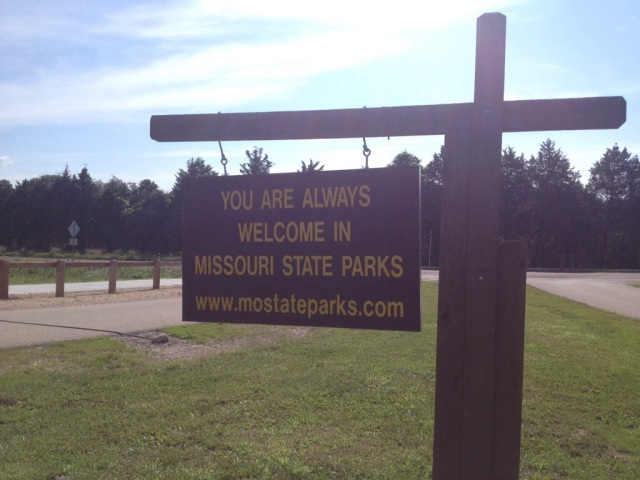 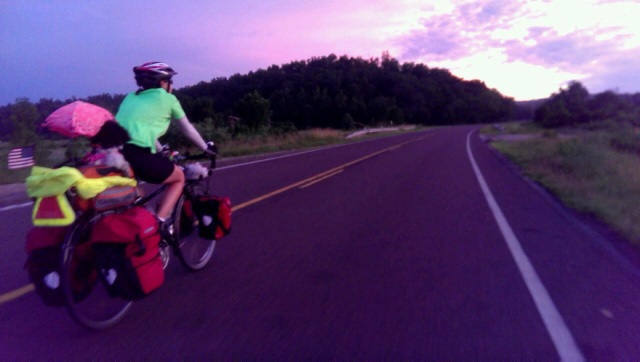 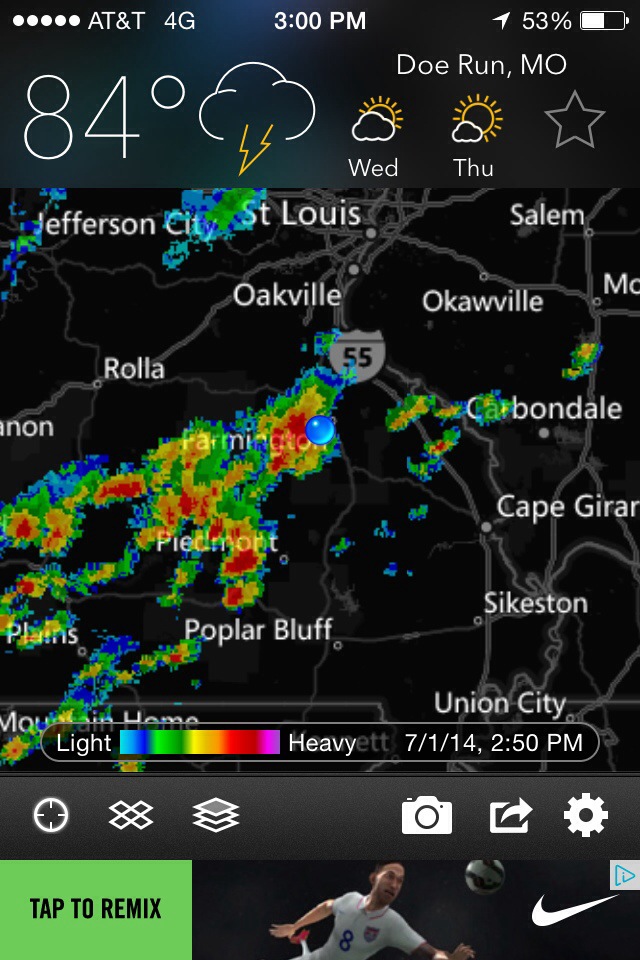 Riding through the Ozarks was sort of like eastern Kentucky, with its unending onslaught of steep rolling hills, but at least it has cooled down a bit and the humidity hasn’t been nearly as unbearable. It’s described as a self-propelled rollercoaster, and I can almost hear the same metallic clicking and clacking as we slowly crawl up each hill. 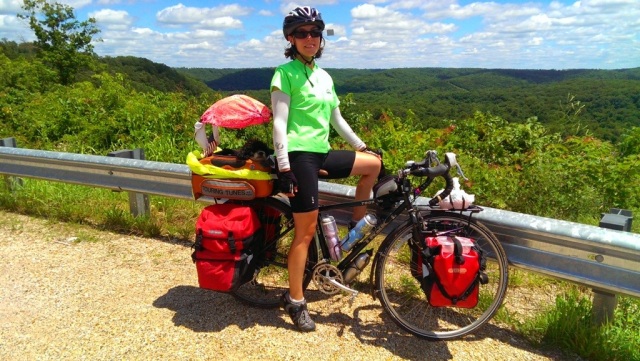 We stopped for a short detour to dip our feet in the gem-colored water under a bridge on our way to Eminence, MO yesterday. It was a fun and refreshing diversion! 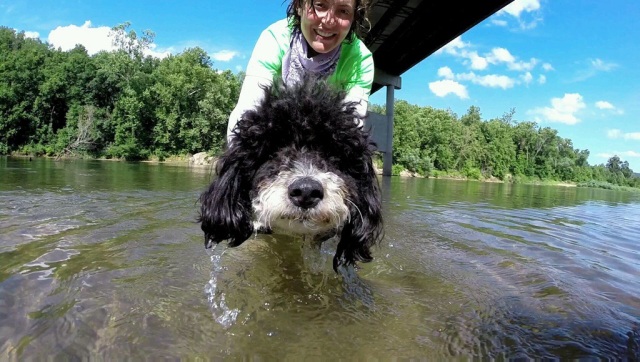 In Eminence, we stayed at a very simple campground alongside Jack’s Fork river, and Jamie got to go for a nice swim at sunset. We skipped rocks in the morning and climbed through the Ozarks for yet another day. 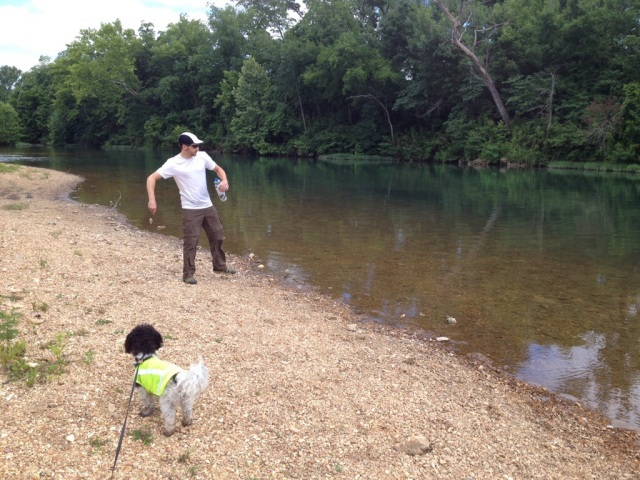 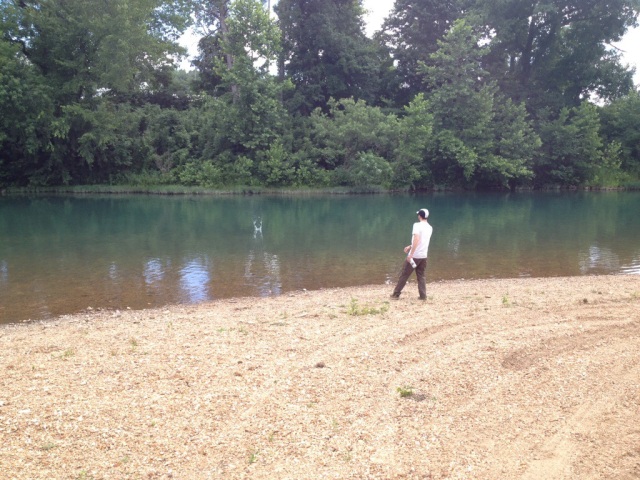 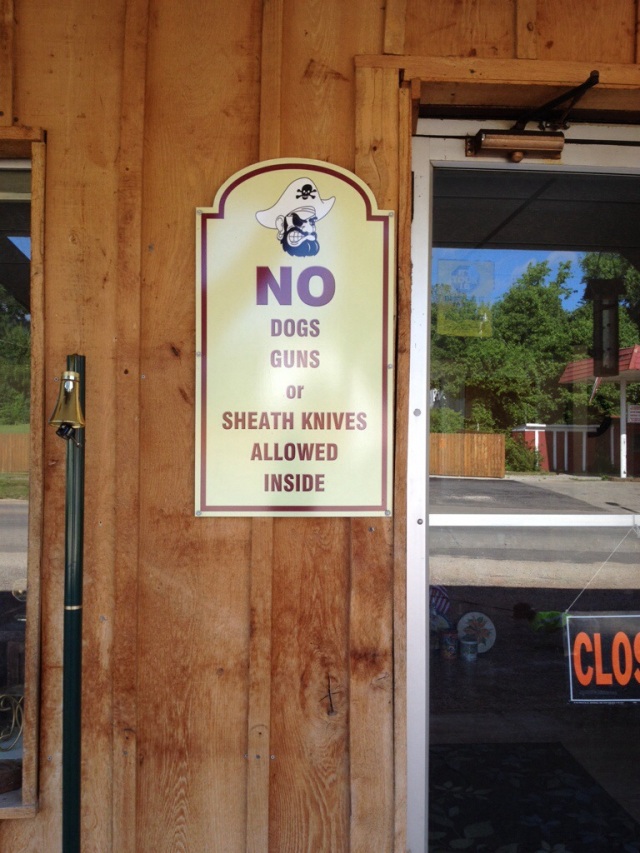 Last night, we decided it was best not to ride too late because the hills limit our visibility to motorists and we’d encountered enough angry, engine-revving, close-encountering, horn honking drivers, so we stayed at the city park in Houston, MO. We showered at the town pool, which was very nice of the lifeguards to give us some time to do so as they were closing for the day.

We’re hoping to make some good mileage today. For the 4th of July, I’ll leave you with a funny slice of ‘Murica. 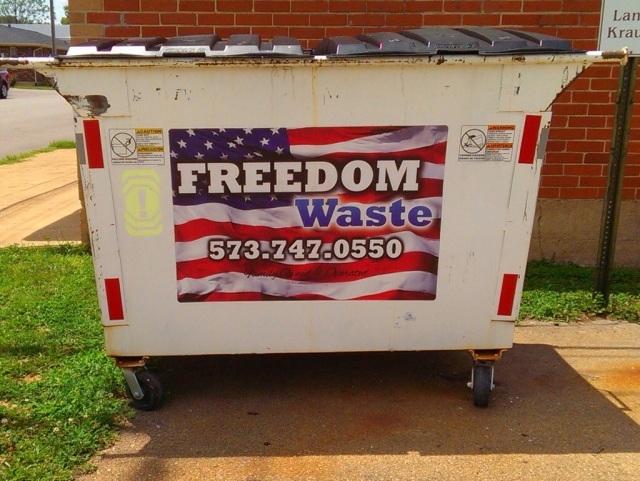