The road was mostly flat and long, bordered by old-western-movie-set rock formations, but not much else. As the sun was sinking low, we arrived in the small town of Saratoga just as the stores were beginning to shut down. I had a dollar store cereal for dinner while Greg opted for upscale Italian fare, and we sat and ate together outside a closed shop, thinking we’d try to head to the city park to camp out. As we inhaled our food, a man approached and introduced himself as Russell from Massachusetts, a fellow cyclist and who had been working in Wyoming for a few years. He suggested we take a free dip in the Saratoga hot springs nearby and gave us his address if we wanted to sleep indoors. We took him up on both, and got to enjoy a very hot and relaxing soak in the springs, followed by a short ride in the dark to find his house. We were lucky enough to have the pleasure of a very comfortable night’s rest and some good conversation about living in Wyoming, cycling in New England, and his life as a self-described mercenary biologist.

In the morning, I polished off my dollar store cereal by the river with Petunia while Greg took his hot prepared breakfast and coffee, and I has the pleasure of meeting the Lasts, a family from California who got a kick out of seeing me with Petunia. When they found out we rode from New Jersey, Ronda said, “I am impressed with you, but I am REALLY impressed by your dog!” I couldn’t agree more. Her sweet daughters Flora and Fauna gave Tunes a nice petting and Ronda gave me the biggest and most genuine and enthusiastic hugs, a kindness that really made my day. Then off we went toward Rawlings.

Riding through the Wyoming wilderness looked exactly as I’d been told- I could see for miles and miles in all directions, and all there was to see was sage brush, sand and horizons. The odd car or truck passed, but mostly the wind pressing against forward progress was our only companion. Sometimes it blew so hard sideways that the bikes were leaning into it at an obvious angle just to avoid being knocked down or off the road altogether. 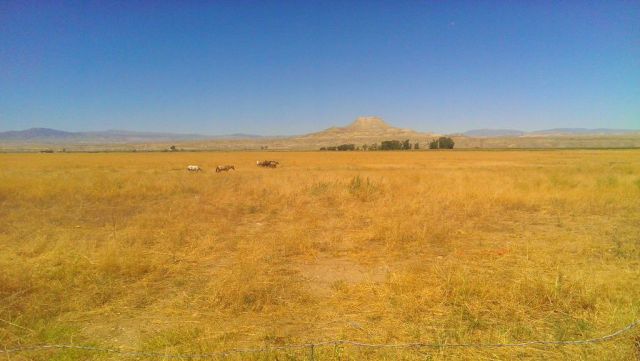 At a gas station in Hanna, we had lunch in the shade of the convenience store and we were chatted up by a nice guy who thought we were absolutely amazing, and he gave us Cliff bars and sparkling spring water for our journey. The generosity and kindness of strangers who find us fascinating is something I can’t get over- it feels like being famous or having some mind-blowing talent, when I just feel like someone riding my bike…. for a lot of days in a row…. with 50 lbs of gear… and an incredibly cute dog.

Effectively, the only way to Rawlings was by way of the interstate for a ~10 mile stretch. The shoulders were plenty wide, but Russell appropriately warned us that I-80 had the most tractor trailer traffic around. The signs posted about the wind were no joke at all.

Having survived our second jag on a major interstate (the first occasion was a harrowing quarter-mile in Denver when we were lost and my GPS decided to send us onto the freeway at rush hour), we set out to find a place to eat and settle down for the evening in Rawlings. We cruised over to the fire department where one fire fighter was still there. She told us we’d just missed the fire department’s trained fire/arson dog, and shared that it was a pretty big deal for that department to have a K9 helper, as it was a rarity in the state and required a lot of funding and continuing education for the handlers. She also offered us a great suggestion of Thai food, adding that “Fire departments inspect the restaurants to ensure they meet code, so we’re a good resource about clean and nice places to eat.” Best of all, she said we could set up camp for free at the town’s fairgrounds, where there were also free indoor showers and bathrooms! You start to realize what luxuries these are when you’re riding a bike across the country.

After a sumptuous meal and a hot shower, Petunia chased a huge fairground pig for a bit before we all settled in for the night. The summer air was warm and some clouds loomed closer, so we tented under a covered picnic shelter to stay dry and cool without using the rainfly and suffocating the small tent.

At 5:30 the next morning, Greg bolted upright, and we both recognized the sound instantly:

“Oh man, the sprinklers all around this shelter turned on. But I think we’ll be alright, it should miss us–”

And that’s when a hard stream of cold water blasted right through the mesh tent wall! We yelped and covered our heads with the sleeping bags until it rotated enough to pass, then Greg darted out to throw the rainfly over the tent to prevent further drenching. About 6 different rotating sprinklers were shooting ice water that sliced in all directions, soaking some laundry we had hanging out, our bikes, and ourselves. Shrieking with laughter, I grabbed our belongings and hopped over and ducked under the lines of spray whirling in every direction.

The sunlight dried our tent, sleeping bags and clothes and we hit a fast food joint in town for breakfast. While using their wifi in an attempt to catch up on blogging, the building experienced a total power outage just as we were emptying our coffee cups down the gullet. “Sooo, does this mean you have to throw out any cooked food now? I’m traveling with my dog and she probably wouldn’t mind saving some breakfast from the garbage bin.” “Sure, I think we could find a few sausage patties for her.” Score one for Petunia.

Then came the slow, hot, and desolate ride to the very strange town of Jeffrey City, Wyoming.

Petunia is an 8-year old Jackapoo (Jack Russell-poodle mix) who has traveled across the United States on the back of her human's bicycle.... twice. She's also cross-country cycled from Busan to Seoul, South Korea. Petunia and her human currently reside in Montana.
View all posts by TouringTunes →
This entry was posted in Wyoming. Bookmark the permalink.

1 Response to Against the Wind