Posted on September 2, 2014 by TouringTunes

Touted as one of our nation’s treasured environmental gems, entering Yellowstone was an exciting day for sure. The pleasant tollbooth ranger that offered Petunia a doggie biscuit started us off on a nicer foot than our last encounter with a park ranger. Much to our chagrin, however, Yellowstone seemed like the McDonalds drive-through of national parks, with cars and RVs zipping through to get to Old Faithful, take photos, and leave. We’ve seen so much natural beauty on this trip, and even though riding through the geyser fields was pretty neat, it seemed somewhat underwhelming, especially with all of the dead trees due to the mountain pine beetle devastation.

There was a slight traffic jam due to a bison who was having a drink from the river running alongside the road, and we rode alongside a rubbernecking minivan to stay out of its way. This unusual road sign was quite germane:

We didn’t see much other wildlife, but the bison was pretty neat. Just before we got to Old Faithful, it started to pour rain, but luckily, we were near the first bridge we’d seen all day. So we ducked under it along with a few motorcyclists to wait out the storm.

We stayed at a couple of different campsites in the park as we rode through it for a few days, including one really nice and simple spot with a $5 hiker/biker site near a lake where we went for a swim in the evening before turning in.

We were riding at a pretty good pace, and got some quality sleep, too. 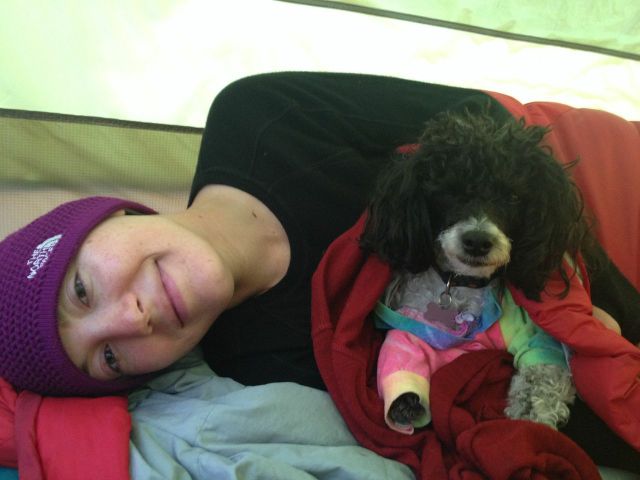 Coming out of the other side of the park on a weekend, the traffic was sort of zoo-like and we had a few close encounters with cars. As we were riding down the main street on our way to the library, we saw someone on a bicycle on the other side of the street, and the familiar voice of the cyclist shouted, “Touring Tunes!” It was Seamus, a sweet young man we met back in Jackson, Wyoming, along with his family when we were outside of a grocery store. The family was so supportive of our adventure and we had such a great talk with them, and it was nice to see Seamus again and catch up on the days in between our meetings. If you’re reading, it was great to meet you all!

Zara from Couchsurfing couldn’t host us, but she kindly offered us tickets to the local rodeo and told us about a major event  in town called the Mountain Men Rendezvous that was going on. We decided to check it out. 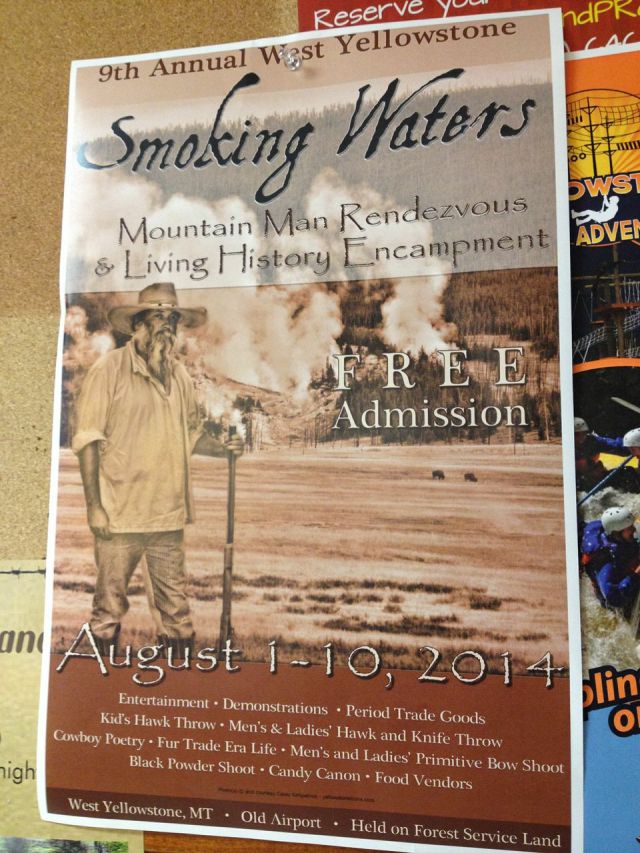 The historical recreation encampment of western settlers was complete with folks dressed in costumes like the women in long calico dresses, men in linen and buckskin pants, celebrating the history of the western trappers and “mountain men.” From their canvas tents and teepees, they were selling pelts, pioneer-style clothing, jewelry, knives, axes and tomahawks and all sorts of pioneer paraphernalia. For a small fee, they let us pitch our tent in the sandy sagebrush-filled lot. We decided to stick around a day to explore the town and catch up on errands.

Greg had been prepared for a possibly grizzly encounter, with a certain amount of “bearanoia” that had him carrying the bear mace around constantly, even setting it on the nightstand of a cabin we stayed in back in Virginia. He finally got a chance to safely practice his defensive moves… against this statue in West Yellowstone.

During our exploratory day, we saw a huge line of classic cars queuing up for a weekend parade, and with Petunia in her helmet and Doggles, we decided to join the tail end of the parade on our bikes! [We got a short video, but no photos, so that will be uploaded at a later date]. It was so fun to cruise by a thousand spectators as people laughed, cheered us on, and clapped for the Touring Wonderdog. It was her second time being in a parade, and she was soaking up all the attention.

In the damp morning air on the morning of our departure from West Yellowstone, we heard someone in the encampment playing the Battle Hymn of the Republic on a harmonica, and we rode our bikes like they were horses bouncing us in the saddle as we rolled out across the rutted ground heading west.

Petunia is an 8-year old Jackapoo (Jack Russell-poodle mix) who has traveled across the United States on the back of her human's bicycle.... twice. She's also cross-country cycled from Busan to Seoul, South Korea. Petunia and her human currently reside in Montana.
View all posts by TouringTunes →
This entry was posted in Montana. Bookmark the permalink.