Posted on September 13, 2014 by TouringTunes

Although the road less traveled was the more poetic route, after our muddy debacle, we opted to hop back on the paved road as suggested  and headed toward Twin Bridges, Montana. We were excited to stay in town along the river, as there was a little bike shack that offered a free shower and place to sleep indoors. We met a cyclist from Denver who was obviously originally from New York (as evidenced by the fact that he illustrated the remoteness of some of the Western Express route by saying “you could dump a dead body out there.”) He shared some info about the route ahead, and described his philosophy of never wanting to retire, but to continue to work and ride as long as he could. “Once you slow down, that’s pretty much the end.”

We realized we had fewer than 1,000 miles left at this point, so we took a half day in town to go to the library and blog, where Petunia was very welcome. We did some laundry, sent some mail back home to lighten the load, including a couple of fun posters we picked up back in a bike shop in West Yellowstone.

From Twin Bridges, we had a nice short 28 mile ride to Dillon, where we realized our daylight and energy was running out. We spoke with some of the folks at the search and rescue department, and they let us camp out in their field in the sand and sagebrush behind an RV. After a cranky evening, we woke up ready to ride on in the head. It was a long ride through vast expanses of nothingness, and a couple of hours in, after we each emptied our three water bottles being carried on the bike, we realized we were had both forgotten to refill the two reserve water bottles. It was not an ideal place to run out of H2O.

Slightly dehydrated and pulling into the town of Wisdom, MT, population 98, the local restaurant was kind enough to serve us near closing time. They brought out a huge basket of crackers to go with the soup I ordered, which we halved almost instantly while waiting for our meal. After a filling dinner, Greg even treated himself to a generous dessert. One of the waitresses there took a liking to Petunia and sweetly fed her some cheese–a favorite treat! 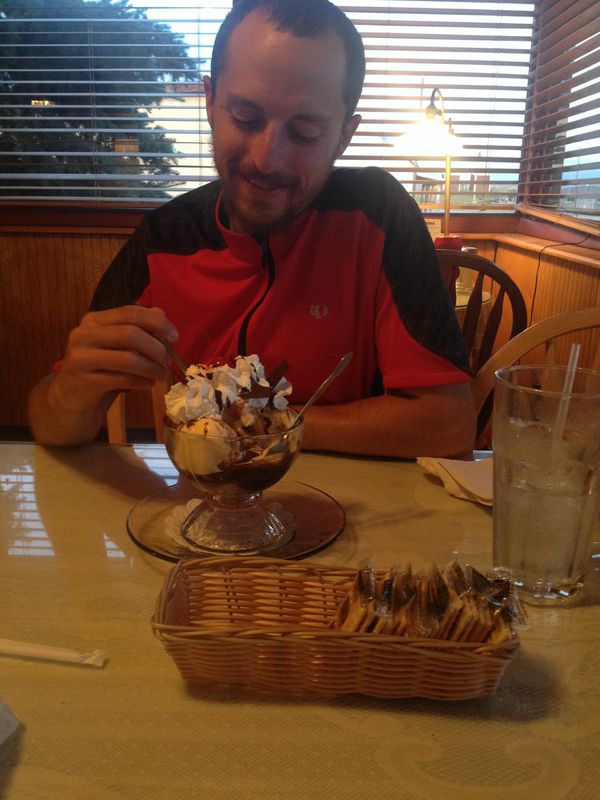 Just as we hopped back on the bikes, we saw lightning leaping out of the suddenly amethyst skies and the pouring rain began just as we sprinted the quarter mile to the town’s bike shack. The shack was situated in a nice little park with a water pump and a screened in hut for us to hide from the storm. We got a great night’s sleep and stayed dry. 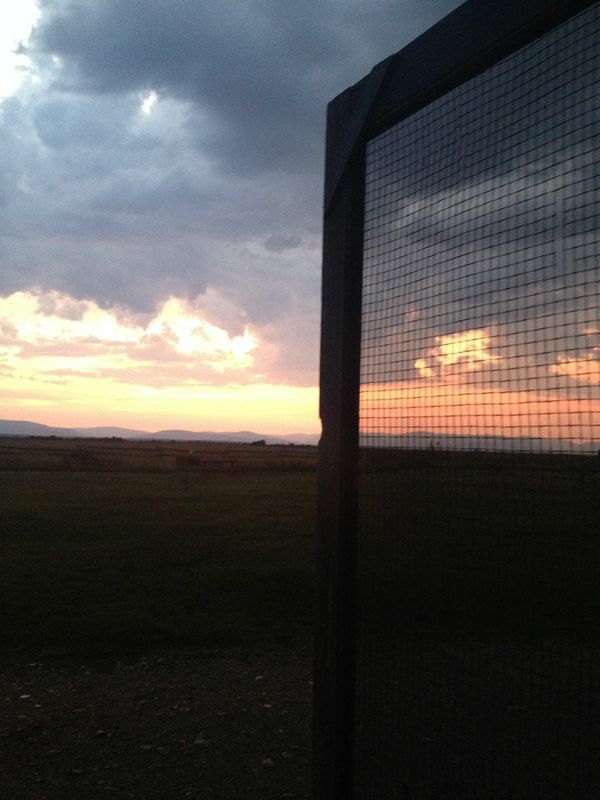 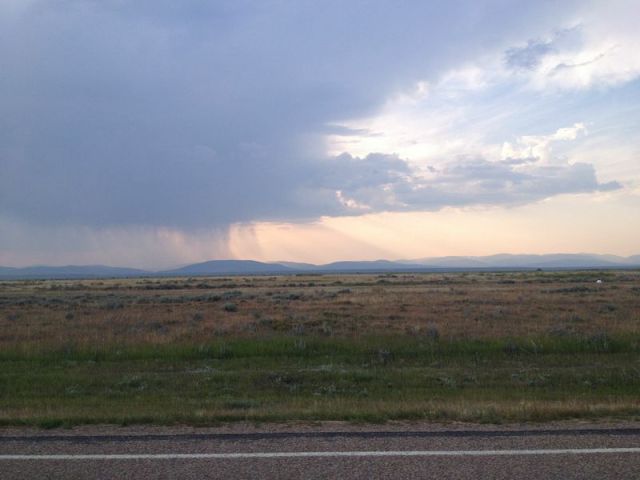 The previous night, my knee had been feeling the strain, but I was disappointed when the pain hadn’t lessened by the morning. Getting an early start the next day, my knee felt poorly, and five miles into our journey, we pulled over to discuss our options. Eying the sizable hill that was just ahead, I remembered Metta and Jay’s advice again– “it’s never too late to turn around,” and with Greg’s support, we decided to take the day to rest, ice the knee, and get organized. Back to the shack it was.

This ended up working out for the  best. I iced my knee all day and got to read and rest while Greg helped out with the perpetual laundry pile. In the evening, the cold was setting in quickly and the kindly woman at the town restaurant offered to bring us some firewood to the campsite. “I’ll show you how we make a fire in Montana,” she said as she poured diesel on the thick logs and got a nice roaring fire going. We stayed warm and dry, and got a great night’s sleep in preparation of the next day’s return to the road.

Petunia is an 8-year old Jackapoo (Jack Russell-poodle mix) who has traveled across the United States on the back of her human's bicycle.... twice. She's also cross-country cycled from Busan to Seoul, South Korea. Petunia and her human currently reside in Montana.
View all posts by TouringTunes →
This entry was posted in Montana and tagged bicycle touring. Bookmark the permalink.