Song of the day: Fountains of Wayne – Peace and Love.

In the bookstore/cafe where Tunes and I dried off for a bit yesterday morning, a very passionate and potentially overcaffeinated woman at a table on the other side of the stacks was loudly talking at someone for the better part of an hour before we heard another voice get a few words in edgewise. A southern New England transplant, she was formulating plans to build her idealized Vermont dream home. “I want it to be all about sustainability and permaculture, you know? And I want it to have some character without having a ton of unnecessary corners that are just there to cost a bunch of money. I want it to last me until my golden years, which are rapidly approaching, so it can be the last beach for me, you know? But it’s important to me to work with someone who values that, who is a green builder, who is into ecofriendly design. I’m talking solar panels, maybe water catchment, and all of that.”

“So how about a log cabin?” her soft-spoken architect offered.

“Yeah, that’s exactly what I’m thinking!” was the start of her response.

Petunia and I stopped across the street at the Green Mountain Bike Shop to put some air in the tires, as the previous 20 miles had seemed unusually slow and I’d noticed that the rig below me was flop-flabbing over the cracks in the old mountain roads intsead of crisply popping me right over them. We then started the thousand foot climb over Bread Loaf in the rain. First, we stopped at the Texas Falls at Thatcher’s recommendation. It was a nice spot to listen to the rushing water that had carved different half-domed and circular shapes in the rocks below.  Petunia was wet and not particularly impressed, although happy for a pit stop.

Bread Loaf had one of the harshest-ending peaks/gaps/notches I’d pedaled, and even walk-pushing the last quarter-mile was a demanding workout. To take the pain out, I extemporized dumb little folk ditties to Tunes, who remained curled up inside her covered wagon.

And coming down was almost better than flying. It felt like the unending downhill, including a sharp pitch 15% downgrade that was straight and wide enough that I hit about 40 mph. We passed Middlebury College and stopped to see the Robert Frost dedicated woodsy spot, which made me think of my grandmother and might’ve been a good spot to sit and write or read, but for the bone-soaked chill that I needed to keep moving to escape. My rainjacket, a used ebay super discount on a very fancy brand, was unsurprisingly not very waterproof, or perhaps my body was far from sweat-proof and I’d soaked it from inside out. Either way, it wasn’t a good day for sitting around in wet clothes, and I wanted to hit a town and re-provision soon.

In Middlebury, I ran into a grocery store and picked up some of Tunes’s favorite dog food, a few mini bagels, fruit, and a candy bar, and when I came out, I had a few spectators checking out my gear and my buddy. An employee of the store chatted with me for a while as I had some late lunch/dinner at the store-side picnic table and considered my maps. She said that she’d moved from New Hampshire to Vermont and was delighted with how much nicer the people were here, saying that if you’d stopped on the side of the road here, people would pull over and offer to help you or give you directions, “but in New Hampshire, they’d just as soon shoot you.” She’d suggested I could talk to the local fire department, but the guys there could only offer me camping that was out of the way, charged extra for having a dog, and up another few hills I was not so inclined to ride just then.

I rolled on a few more miles to Cornwall, where there were actually a lot of cars parked in front of their fire department, and made my humble request. The chief was a bit uncertain at first, asking me twice if I was alone, if it was just me who’d be camping there (yes, and little dog, I promised), but he welcomed me to stay as long as I left no trace, which I assured him was my MO anyway. Some of the volunteers were fully suited up in bunker gear, doing drills with lots of beeping equipment and outer-space-sounding vocals through their heavy masks, so I watched unobtrusively and with interest for a few minutes. The rain had finally stopped, but it was incredibly windy, and if I wasn’t in the tent myself, I think it might’ve blown off its stakes and across the mountain ranges, maybe to the Adirondacks, where I was headed the next day.

Above: my last campsite in VT 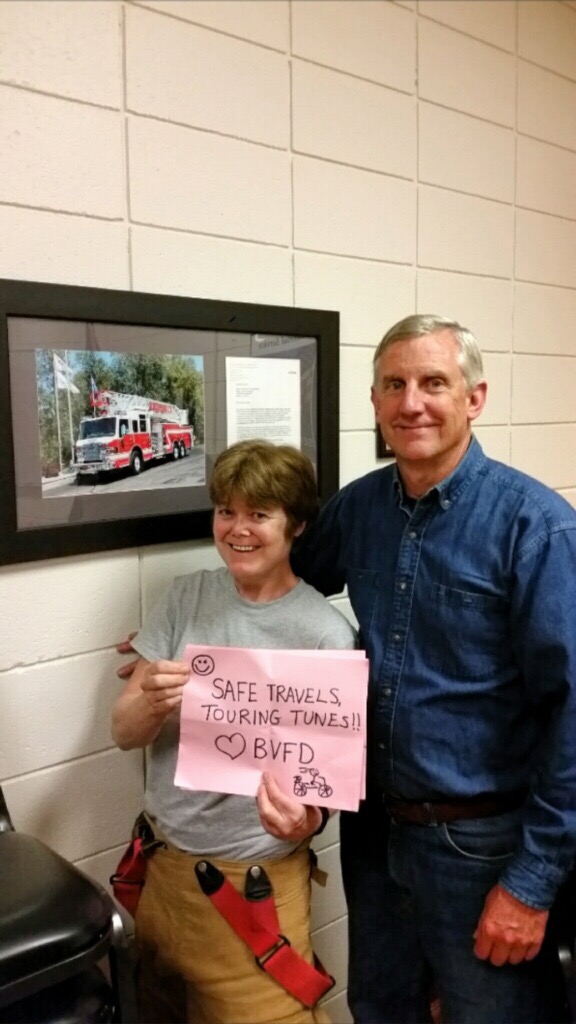