Last year while riding down the coast of California, my fellow tourist Sasha introduced me to the writing of Moroccan medieval traveller Ibn Battuta, and my dad recently sent me one of Battuta’s famous quotes that often gets circulated as a motivational text on a beautiful photo background: “Traveling–it leaves you speechless, then turns you into a story teller.” Although I’ve certainly told my tales at length on my blog, I’ve also become a conduit for people who see me and Tunes and feel compelled to share their own stories with me.

Huddled under the awning of a gas station’s mini mart on Monday morning, I was zipping on my raingear as the bad weather moved in. Morning motorists came by in waves, some cooing over Tunes, and others regarding me with amusement, and several stopped to tell me about their own travels. Les was a local business owner who ran the Vermont Wedding Barn, complete with alpacas, and he told me about a harrowing experience he had riding down a mountain in state, in which he nearly slammed into the back of a dump truck. “I’d caught up to it, flying down Burlington [maybe ?] mountain, and I was just two feet from it and couldn’t brake any more. I started thinking I was going to bail off the bike and jump and reach for the back of the truck to hold on. How are your brakes?”  Shortly after, an older guy with a defensive lineman build came over to share his stories of touring through France in his heyday with some friends. “But, of course, I had to carry the tent and the fry pan, the real heavy stuff. Give it to Lurch, he’ll carry it, they said.” 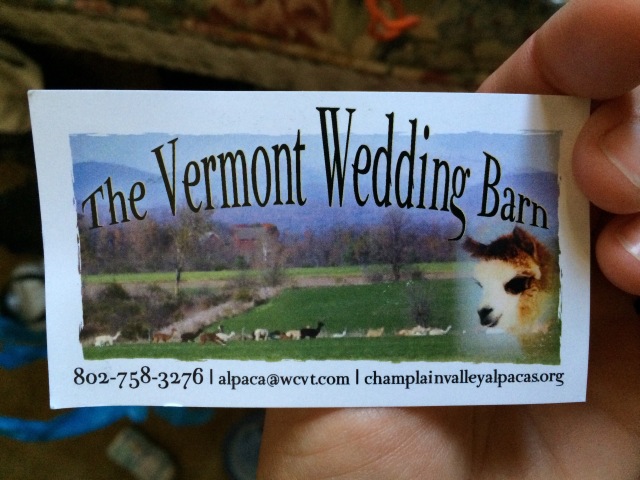 We decided to hang out a while and have a late breakfast/early lunch under the overhang of the Shoreham library. Even though it was closed on Tuesdays, they had a few picnic tables and I caught up on some reading, writing, work, and Petunia was fed and we played in the big field with her squeaky toy for a while. The rain slowed, and before we were finally ready to move forward, we stopped in nextdoor to the cottage-sized town office building. The woman at the front desk very kindly allowed me to use the restroom, fill my water bottles, and she even offered chocolatey treats from her candy dish. She asked if I was following the Adventure Cycling route, and I knew this woman knew bike touring! She told me her former boss had done a long north-south cross country tour, and that sometimes he’d called the office, demoralized in a tent somewhere in the rain eating the only thing he could find–beef jerkey– and sought comfort from his colleagues. But the town clerk employee must have been an animal lover, because she understood that Petunia was my all-weather companion and confidante.

We took the two dollar ferry across to Ticonderoga, NY, and halfway across the river, the rain started pouring down even harder. 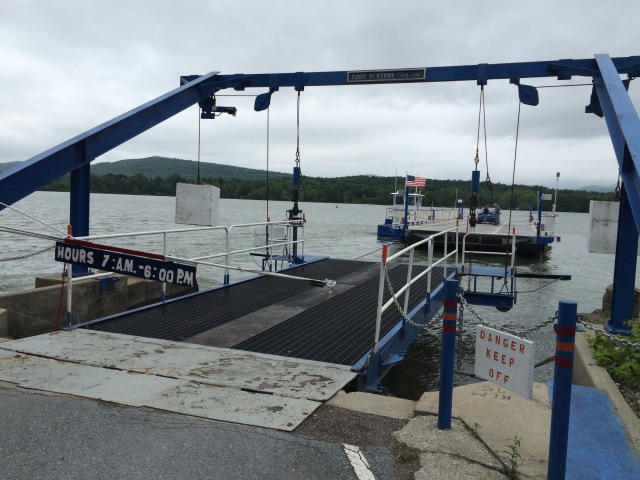 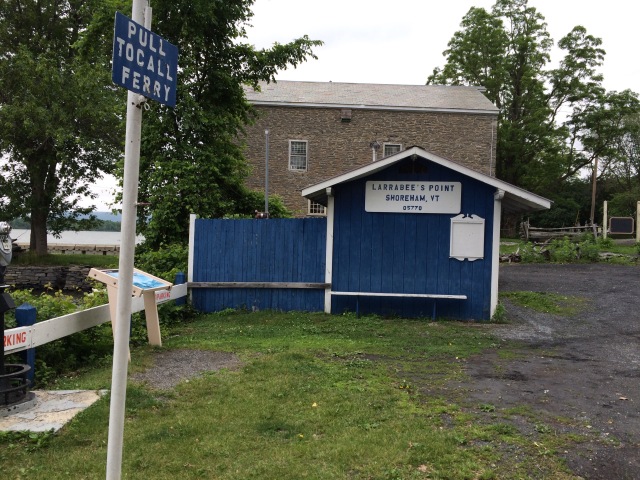 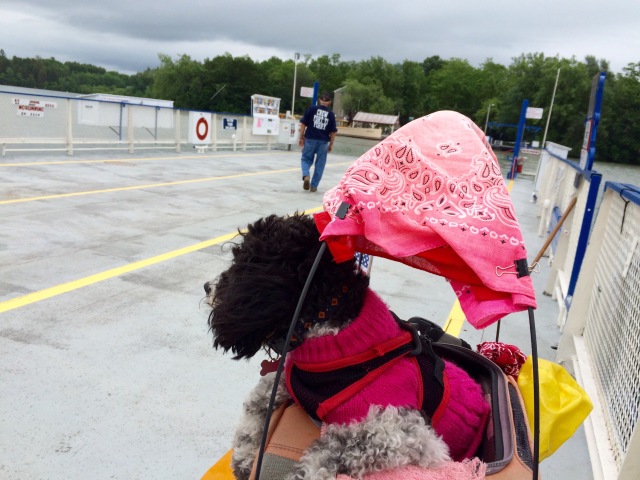 I covered Tunes in her rainfly and we rode past famous Fort Ticonderoga, uninclined to stop for a soggy touristy visit, but did take the obligatory state sign pic. 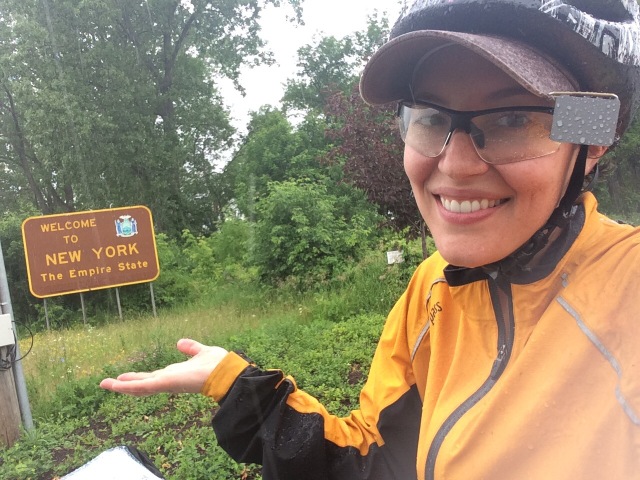 By the time I got to the heart of the city, I was thoroughly drenched and feeling a bit stiff, and Tunes was the picture of water-logged weariness. We stopped into a fast food spot, pulling in just behind another cyclist and her closely-following VW bug sag wagon. Wendy was riding around Lake Champlain over a few days, staying with friends, and her husband Tom was following with gear, a dry sweater, and support. We went inside and had a nice lunch together. I felt badly that Tunes was outside still, so I got her a burger to buoy her spirits. Wendy and Tom were both very intelligent professionals with many similar interests, and we talked organic farming, forensic psychology, non-profit evaluations, NPR, and of course, about bike touring. It was nice to share some time with them, and I wished Wendy good luck on her trip, and best wishes to them both, before they took off again. 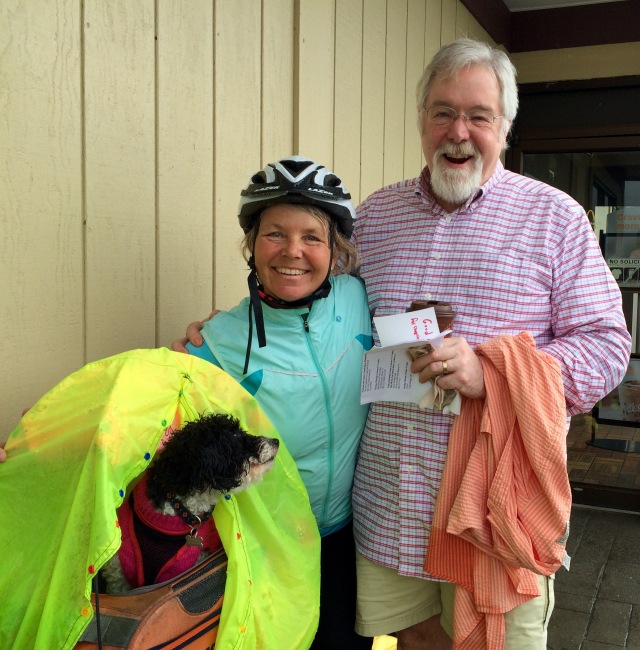 It was already getting well on into the afternoon, and I looked out across the way to see what looked like an unending ascent into the low, smoky clouds that were covering the Adirondack peaks. Yuck. I looked at Tunes, slumped down in her mobile home, full of burger and still displeased. 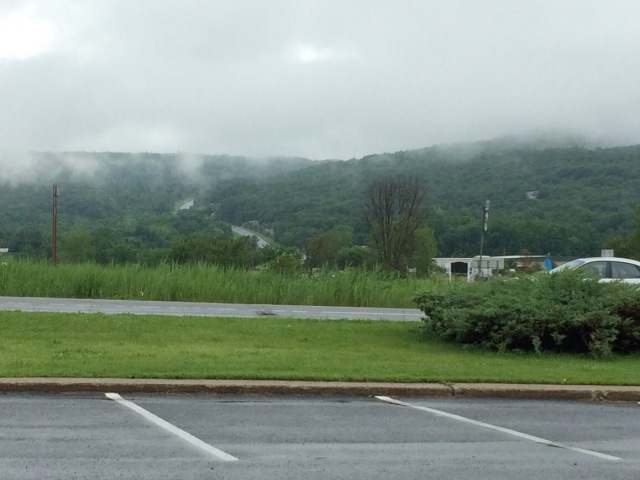 I took out my cell phone and looked up what the cheapest motel in town was. A woman answered the phone casually, and unfussily gave me a rate that was less than half of what all the other chain places were quoting. I looked at the mountain, the map, the clock, feeling like I should push on– it’s just rain, right? I could do it. But I tuned in to my gut feeling, and it said, you could do it, but you don’t have to if you’d rather do something else. We pedaled to the big house-looking motel, checked in without incident, and once Petunia hopped on the bed and I jumped in the shower, happily sudsing up with the provided thin-mint waferesque bar soap, I knew that this goldenrod shaggy carpet roomstay was totally worth it! 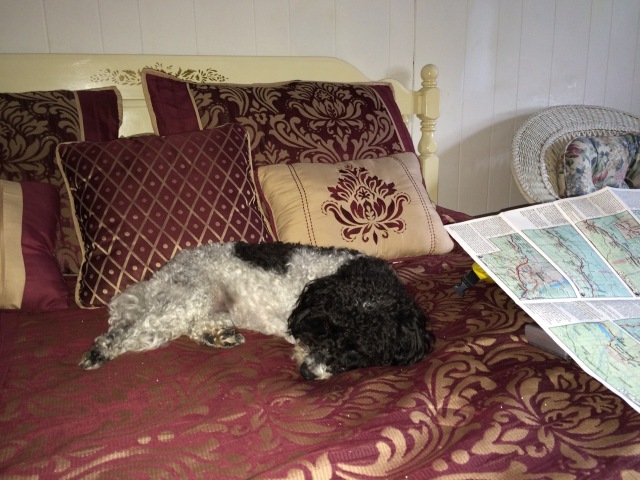 Once clean and settled in, I was surprised to see that the sun had come out. And I mean, it really brought it hard– squint inducing, humidity producing, late afternoon sunshine. I stripped the panniers off the Trek and decided to take advantage of the rest of the day in town. This was no longer adventure cycling– this was vacation bicycling!

The first order of business was to get my long, unweildy mop of hair under control, so I stuck my raggedy-coiffed head into several salon doorways to ask if they had availability and non-glamourous rates. Without luck on my first two stops, my third try was a success, and hairstylist Karen even let me wheel dog-on-a-bike into her shop. She itantly ID’d me as someone “not from small town Ti!,” and when she heard about my adventure, she said in all seriousness that I was brave, and so did her aunt who came in a few minutes later. I don’t feel brave exactly, just…. lucky. Really, really lucky. Karen caught me up on the ongoing manhunt for the two murders who had recently escaped from prison just over an hour away from their home. She told me she’s seen a few state cop cars in town today, which was unusual, and that the news was showing a massive search effort underway just outside of the prison where the guys broke free. “Just be careful where you sleep at night!” she cautioned me. I doubt that I’m going to get bike-jacked by two dudes who don’t want to show their faces in public again, and I have a better chance of getting hit by lightning, or even a car, than the odds of running into them as I roll through NY. With my appropriately short, sassy, and manageable cut completed, I bid spunky Karen goodbye, but not before pleading to snap just one picture of her in her shop, despite her protestations. 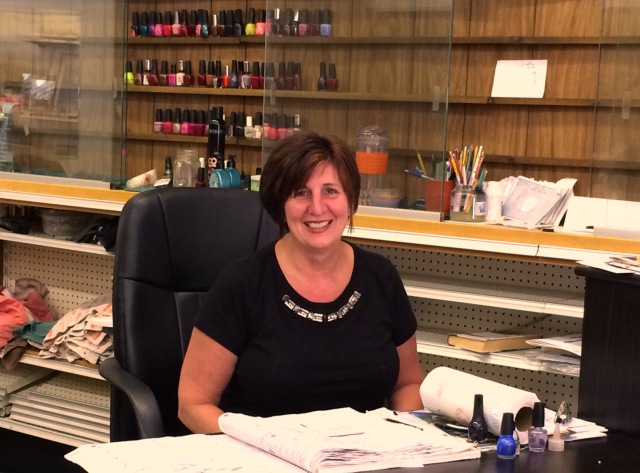 While the sun shone, we hit the local bike path for a quick spin so Tunes could do some free range running! 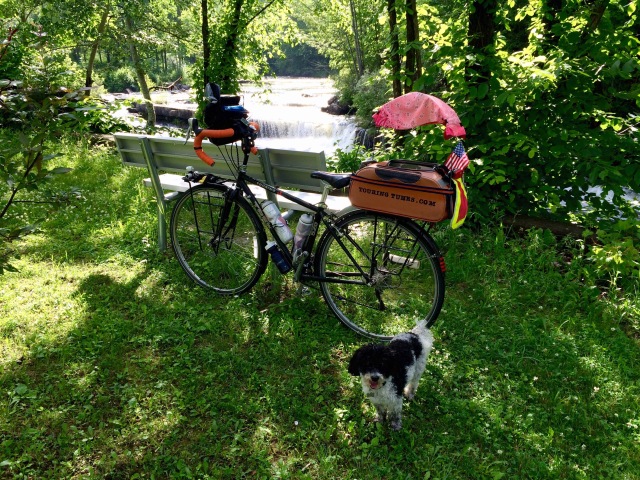 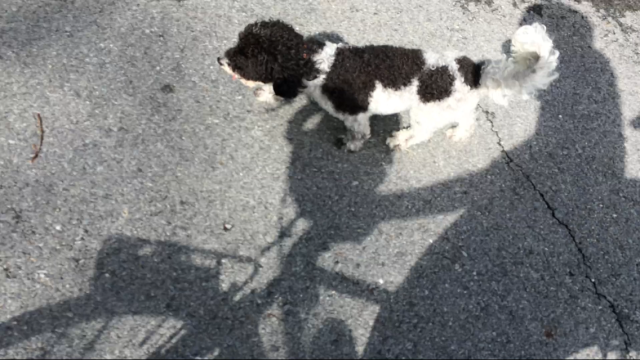 The baby La Chute river was pretty and easy to walk down to, so I read a little sign about it,  stuck my feet in and sat quietly for a little bit listening to the water flow forcefully over the rocks, with Tunes by my side. 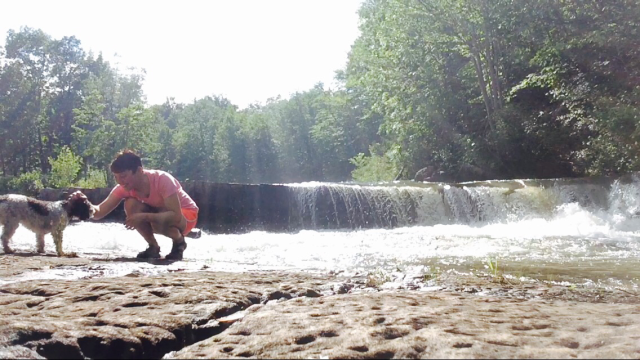 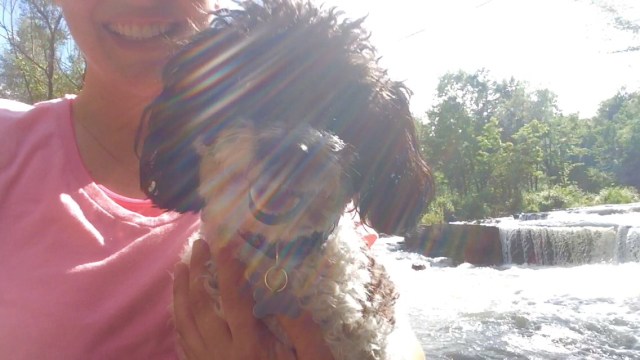 Back through town, we rode around and were tempted by the savory smells emanating from a roadway chock full of BBQ joints, upscale American fare restaurants with their dark and heavy façades, but ultimately ended up at a grocery store to have an affordable and still fun DIY feast. The room mad a microwave and a mini fridge, so we got a can of soup, a bagged salad mix, a soft nectarine, and a chocolate milk. Bam! A fiesta! I must’ve been really hungry, because I capped it all off with two big chocolate peanut butter cups AND a half of a coconut-chocolate treat. I did a load of laundry, with much gratitude to the hotel owner, who looked like Paula Deen but with the mannerisms of Dorothy of the Golden Girls, as she comped me some detergent that I needed badly.

By the time I’d unpacked and did laundry, cleaned up gear and self, and started listening to a funky short story read by Wil Weaton, I was barely awake enough to turn out the lights. But I managed, and slept in until a ridiculous 7:45 the next morning! I guess I needed the rest. Feeling fresh and ready, I began the prep to charge up rt 74. Piece of cake! More stories on that tomorrow… 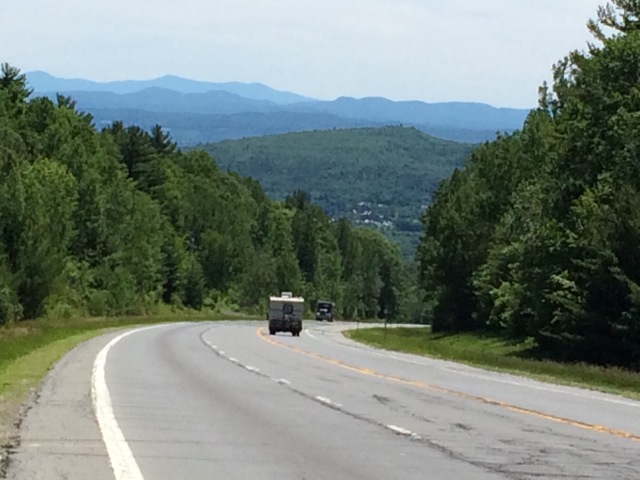 I’m often asked, “don’t you get lonely doing all this riding by yourself?” But between Petunia, technology, and the hundreds of people I’ve met just in the last month, with whom I spend sometimes just a few enjoyable moments hearing and sharing stories, I can’t say I feel lonely at all.

Song of the Day: The Old Hotel Rag by David Grier.