Back Home Again in Indiana

Fueled up on the fantastic breakfast that Lavonne and her beautiful family shared with me,  I was rested and ambitious enough that I decided I could to make it to Rensselaer, Indiana, where a farming family said they could host me if I succeeded in making the 90 mile ride. There was a steady headwind, and although I was primarily riding due west through endless corn and soybean fields, whenever my route took a 90 degree turn on the grid system roads, it seemed the wind changed to insist upon slowing me down just a bit. It had stopped raining, finally, and the July heat was back, hovering in the mid to upper 80s. Cow and I drank lots of water. 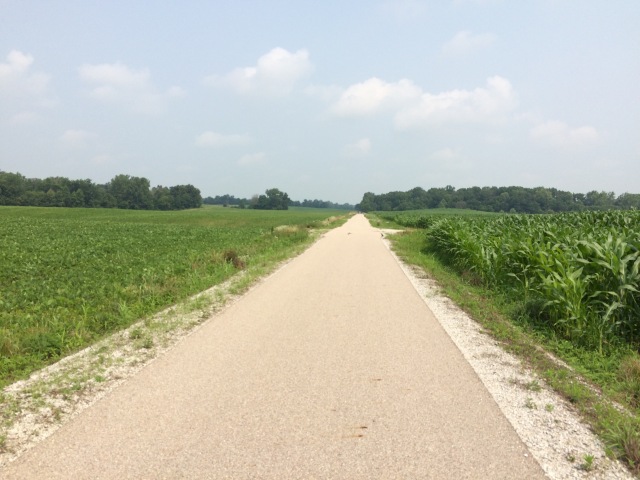 Soy and corn, as far as the eye could see, all day! Hardly any houses, and almost zero stores. Along the way, we stopped at a WS host’s farm house, whose profile indicated she welcomed people who just wanted to stop for water and to say hello, even if they weren’t camping out for the night. I knocked on the door with a few empty water bottles and met a kind woman named Frances, who replenished my H2O and also offered me iced tea and  a decadent slice of chocolate cake. I sat outside and, having already had my dessert first, had a PBJ lunch, and we talked about her large family (8 children and something like 50 grandchildren), and discussed her farm and beautiful gardens that she’d been working hard on. Petunia had a little nap in the grass as she told me a story about one of her cyclists guests who had once explained to her granddaughter the best things about bicycle touring. “He said that, number one, the most wonderful part is all of the people that you get to meet, and secondly, the way you get to see the country in an entirely different way than if you were to drive across it on the interstates. But the worst part of it is waking up and getting on the bike every morning.” Ha! Spoken like a true long distance rider.

Frances’s yard, an oasis in a sea of corn:

We said our thank yous and goodbyes and pedaled on until we crossed into the Central Time Zone, which was helpful because it bought me an extra hour on the clock to haul the last 10 miles by 7 PM, our anticipated arrival time. In a day, we’d raced across over half of the width of the state of Indiana.  When hosts Kyler and Kimberly greeted me, I was so tired and happy to get off of the saddle that I felt a little loopy. Kimberly’s three daughters played fetch with Petunia whie I washed up in the guest house that they’d invited me to stay in. When I came back out, they’d set up supper for me next to their fire pit, an arrangement of some of my absolute favorite things- salmon and beets with fruit and pumpkin pie. It was heavenly.  I’d arranged with them to have a rest day at the house, so we said goodnight and I prepped my bike for another night of rain. Petunia found a comfy spot on their big bean bag chairs and we had a very relaxing evening. 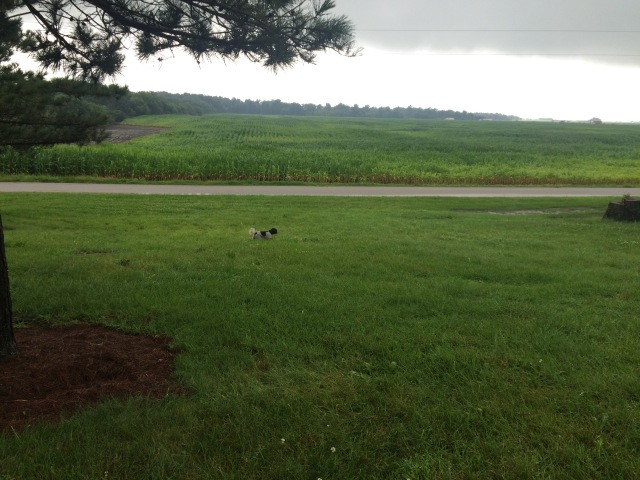 On my day off, we finally got some afternoon sunshine and I hand-washed the smelly tent and set up a line between two trees to dry my gear while their chickens ran around happily. I did regular laundry and some bike maintenance as well, then went to lunch with Kyler at the town’s new restaurant and we had gyros.

Tunes says hi to chickens- once they start running, she goes into tag mode and runs away.

A farmer and engineer, Kyler was working on developing tractorbots, and I helped out for a few minutes, and even got a demo of this large unmaned machine in action. The tractor had been in the family for a few generations, and bore handwritten inscriptions with some dates noted by his grandfather and his father. When I asked if he’d left his mark on it yet, he said he’d given it a couple of dents and dings. He said his dad used to say whenever he banged things up as a kid, “you’re not the first person to do that.” 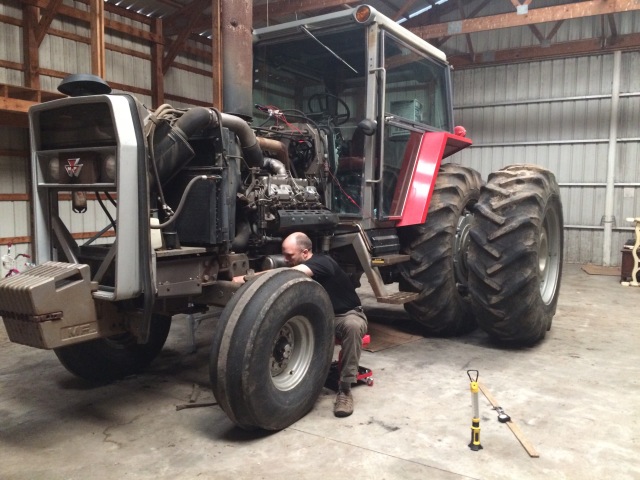 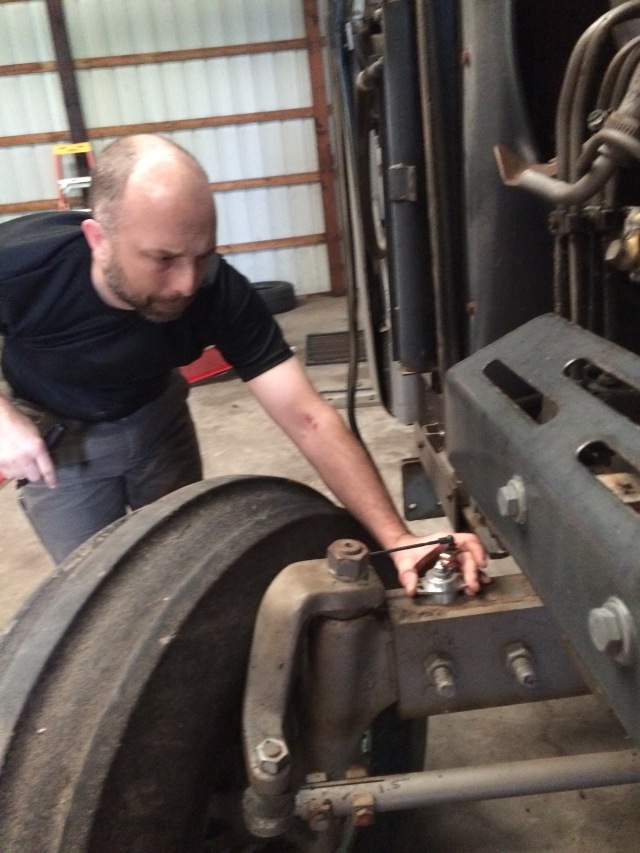 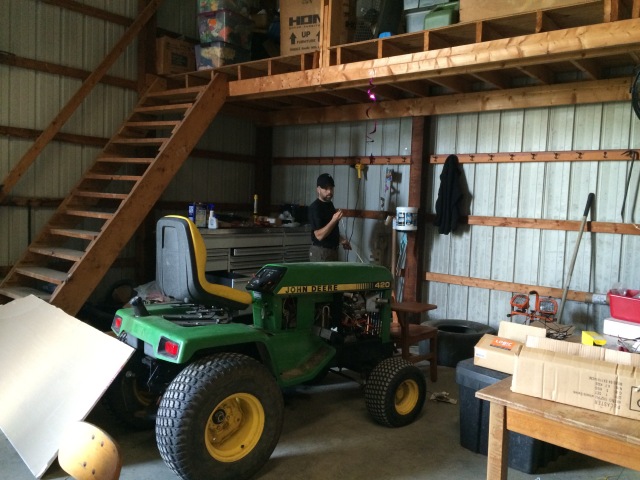 It was a great rest day and I was thrilled when they ended it by bringing home some amazing Thai food. I felt totally spoiled by these generous people. In the morning, they offered to help with anything else I needed on my trip, I gave them big hugs, and Petunia and I were on our way.

It rained steadily, but worse than that, there was major road construction going on for miles of my route. It was rough and bumpy riding that slowed me down and rattled my skull in my helmet. We went past incredibly stinky chicken farms that reeked so strongly I was nearly knocked off my bike. Suddenly I saw a sign that said I was leaving Jasper County and entering White County, and I said aloud, “uh oh.” I took out my compass. I was riding east! I’d done over 20 miles of backtracking eastward when I should have been in Illinois. 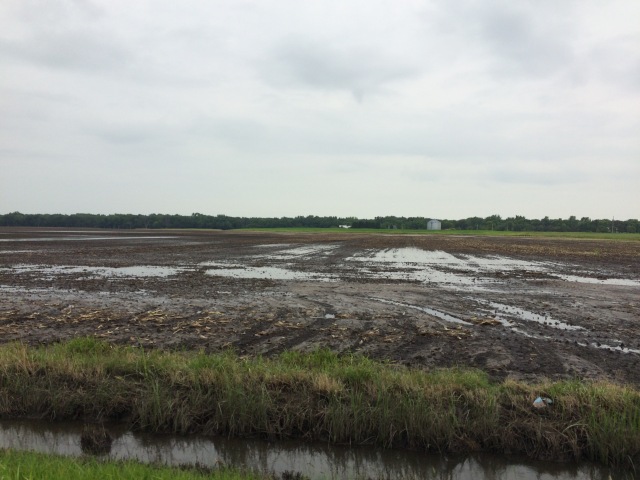 I thought about the rough road I’d just taken and about my host’s offer to help, and decided to take a bicycle mulligan. I called Kyler and he was there in just a few minutes. When we got back to Rensselear, they were just having lunch and I was invited to dry off and join them. I so badly wanted to reciprocate the many kindnesses, so I offered to help out with any projects where I could be of service. Kimberly let me join her in sanding some furniture she was refinishing for the guest house they were renovating, and it was fun to talk about all sorts of things with her– books, tiny houses, feminism, our families, and her work as an acupuncturist and herbalist. After getting all of the dresser drawers stopped and sanded, we decided we’d have a fun outing and the three of us plus baby Serena went to see  the new Pixar movie, Inside Out, which was a treat. We concluded our day with an awesome meal at home, more laughter, and lively discussion. My hosts invited me to bring Tunes as they were going to run their six therapy dogs, which meant we piled onto their ATV and zoomed around trails through the muddy cornfields while the pack ran close behind. Petunia was having so much fun running at top speed with her new friends! She could keep up just as well as the big dogs, and she looked so happy that I couldn’t stop smiling myself.  Another wrong turn had led me somewhere special, and I was so very grateful for the opportunity to stay on an extra day and have more adventures. 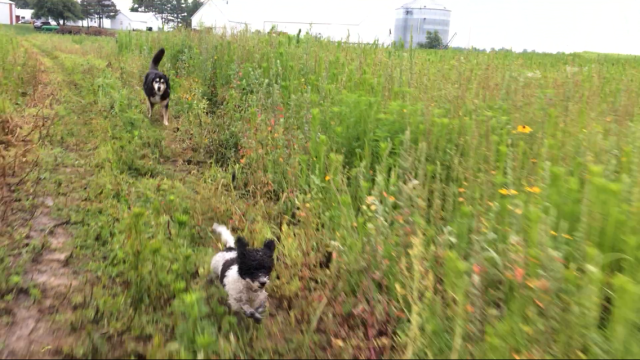 Their small dog, Ellie, got to ride up front over the big puddles. But usually water-averse, Tunes was ecstatically bounding through the puddles. That’s my swamp dog!

After one more comfy night, dry and indoors, we set out once more, and this time, really heading west, we made it to Illinois.

Song of the day: Back Home Again in Indiana, Bing Crosby version.