Get Your Kicks on Route 66

After a quick breakfast sandwich I inhaled while talking to some locals in Ashkum, we had a dry and temperate start with good cloud cover. There were miles, and miles, and miles of corn and soy everywhere. I’d anticipated the lack of services, so five water bottles were filled and ready. Tunes did some free-range running on the totally silent roads. This was quite safe, as the pavement wasn’t too hot, there was plenty of visibility up ahead and back. Though Tunes only ran a few miles at a time, we didn’t see a car for well over 25 miles in the farmlands of Illinois.

Petunia thinks, “Sweet dreams are made of cheese, who am I to disa-brie.”

The catdog of cars was spotted in Ashkum. 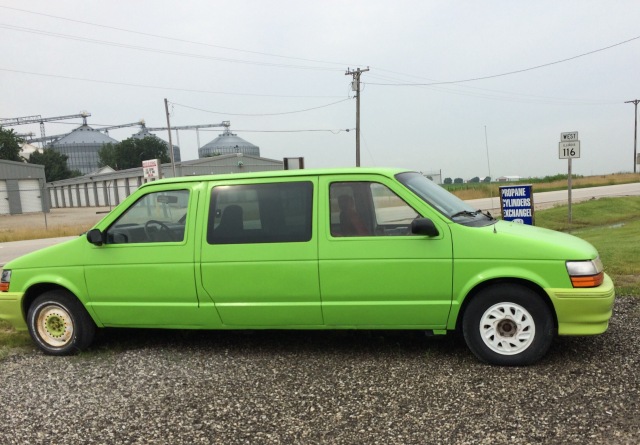 I started listening to the audiobook Merle’s Door, a great dog and human tale, which entertained me as I sped across the flat land to Ordell, where the route intersected with historic Route 66. Just before the heart of town, I stopped in a little park to make a PBJ lunch in the shade with some cheese and crackers, and a little girl who was there with her mother came to say hi to Petunia. She very gently patted my pup on the head, and even threw the tennis ball around for Tunes and her silly game of chase. The little girl asked if I would swing with her on the playground, which was totally adorable, so I gave her a push to get her going and then we enjoyed the sunshine and the breeze together for a minute as her mom and Tunes looked on. They were on a road trip of their own and we waved after their car pulled off. In town, I stopped for a cool drink and since it was now sunny and in the upper 70s, and put some ice in the small water bottle and set it in the Petunia carrier as a little cooling unit. 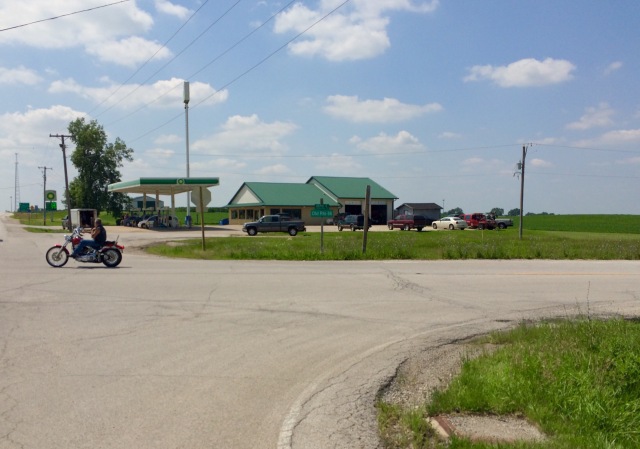 A few miles after leaving Ordell, I saw a touring cyclist in the distance who seemed to be loaded up with even more stuff than I. We both slowed to a stop and I met him on his side of the street to say hello. Max was riding from Iowa to DC, and when he shook his handlebars, his whole bike wobbled from the substantial weight. I’d just bought some little boxes of raisins so I offered him some and we exchanged travel stories. He asked where I was planning on staying and I told him I was considering making a big push to Henry, IL, where the city permitted camping in the park. He told me he’d just come from there, and the town was having a big fair over the weekend, and that there was a lot of noise late into the night. “Thanks for the heads up. I guess I’ll just do a 75 mile day and end in Wenona, then,” I told him, grateful for the advice. He opened his handlebar bag and fussed with a little jar, then handed me a little inspirational card, and two tiny objects, one wooden and one metal. “I carry so much stuff on here, I’m handing out washers and dryers!”

Ohhhh, Max. I see what you did there.  Thanking him for the good cheer, I resumed riding to make the last 20+ miles to Wenona, through yet more fields, but with tall walls of corn. I’d recently learned the old farmers’ saying, “by the 4th of July, corn should be knee high,” but because of the rain, much of what I’d passed was yellowed and short, or just plain underwater. But where it had thrived, it seemed to be far taller than I, and I had to be extra careful at rural route intersections to stop and check for crossing traffic (even though there was never any. I didn’t want to find the exception the hard way.).

Once in Wenona, I was greeted by a thriving metropolis in comparison to the silence of the soyfields. It just so happened that I landed in town on the night of their big car show, and there were a couple of food vendors and local businesses tabling, and everyone in town was out and about on their Main Street that had been closed for pedestrians (and the parked show cars) only. We cruised in and were treated like celebrities, with people coming to talk and take pictures and shake my and (and Petunia’s paw). The city park was on the other side of town, about 5 blocks away, where a youth baseball game was taking place. The staff person at the concession stand unlocked a “biker bathroom” that the town had set up for cyclists’ use, and I had a nice warm shower and a place under and overhang to set up camp. I could hear the revving motors of the retro cars and peeling out of sporty tires into the night as we tried to fall asleep, getting ready to take on another hot day tomorrow,

Song of the day: Chuck Berry’s version of Route 66. Fun fact: The lyrics mention Winona, but it’s Winona, AZ that’s on the Route, and not this Wenona, IL, according to Wikipedia.

1 Response to Get Your Kicks on Route 66